Posted on February 3, 2020 by Journeyman

Chichen Itza, One of The Seven Wonders of The World, in Yucatan

Today we left Merida for Playa Del Carmen, with a stop in Chichen Itza in between. We departed early at 8am, after having breakfast in the hotel, and drive for 1.5 hour to one of the seven wonders of the world. I mostly sleep on the way, as I felt terribly tired after seven days of heavy physical activity and lack of sleep. One thing I instantly noticed arriving at Chichen Itza is the number of tourists, which was surprising for an off-holiday season. Unlike other sites I have visited, including the Teotihuacan Pyramids, there was burgeoning numbers of people waiting to buy their tickets at the entrance of the site.

Chichen Itza, One of The Seven Wonders of The World, in Yucatan

Our site guide is a guy in his 40 that is very funny and captivating in explaining the functions and history of temples surrounding the main pyramid. The weather was hot, but not excruciatingly hot as in Asia. There were souvenirs vendors alongside the road to the temple and more on the way to the astronomical building ruins. Two things I learned from the guide explanation is that the Mayan priest use the sound effect of the buildings and various rule he made up to control the people, and lots of sacrifices were made at that time.

After the visit, we had our lunch at a Hacienda located 5 minutes away from Chichen Itza. It is like a hotel with a buffet restaurant that cost MXN 140 (US$ 7) without drinks. It’s not fancy, but they served salad and a mix of both Mexican and international foods that was well worth it for the price given. We departed at 2pm, leaving Yucatan province, and drove east of Merida to Playa Del Carmen, a town with famous for its beach and resorts on the province of Quintana Roo.

We arrived at 4.30pm, checked in Hotel Playa Del Carmen located three blocks from the beach, and head out for a walk at the fifth avenue. Few of us strolled on the beach, before returning to the fifth avenue to buy ice cream and look around at the stores alongside the road. At 7pm, we were already in the hotel and Maria guided us to ADO bus station (where I have to buy ticket to Cancun airport the next day) and walked around the square on the Southern side of the city. 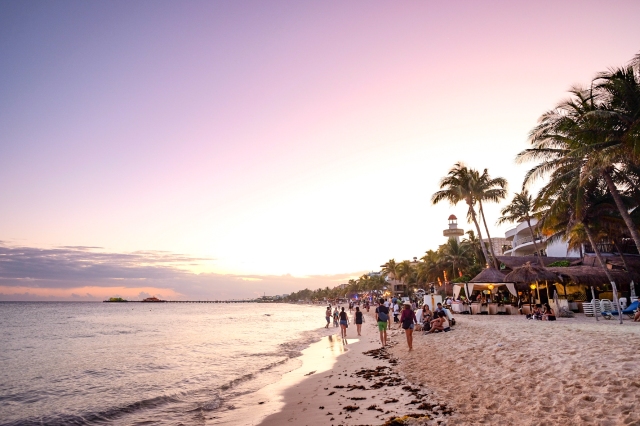 Sunset at The Beach in Playa Del Carmen

For the final dinner together with the group, we had it on a Mexican restaurant on the fifth avenue. I ordered a mix of grilled seafood, which tasted great and similar to those I used to have in Indonesia. It was quite expensive, but the fact that I can’t find decent grilled seafood restaurant in Montreal means that I have to stomach the cost. I joined the others going back to the hotel soon after the dinner, as I had plan to watch the sunrise tomorrow morning in Tulum, an archeological site an hour away from Playa Del Carmen.

Last Dinner with The Group

I slept roughly for six hours the night, before waking up at 5.30 am and walked to the service collectivo minibus station next to my hotel. There is no fixed schedule when the minibus will depart, but they will depart as soon as it is full. There were several major stops on the way from PDC to Tulum, but essentially you could stop anywhere you wanted, and the driver will even do some short de routing to drop you off exactly where you want to. Although it was Sunday, my minibus was cramped with locals who were traveling from PDC to work at hotels or restaurants scattered alongside the road to Tulum.

I tracked how close I am to the destination using google maps, and when it was close enough, I said, “Zona Arquelogica de Tulum, por favor”. The driver dropped me off on the side of the highway, where then I have to cross and walk further east for 15 minutes to reach the ticket office. But it was a pleasant walk in the morning, when the weather was nice, and the sun is not high yet. Moreover, I had no problem with mosquito during my stay in Yucatan peninsula.

Ruins on the Cliff at Tulum Archeological Zone 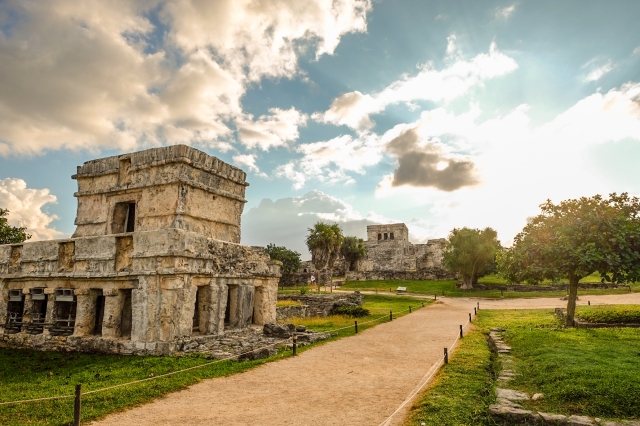 The entrance to Tulum Archeological Zone cost MXN 80 (US$4), with an option of 5am-7pm (sunrise a sunset) entry for MXN 260. Since it was almost eight when I arrived at the ticket office, I waited for ten minutes to get the cheaper ticket before going in the archeological zone. At the time, there was only one German tourist ahead of me and several others behind me.

View from the Cliff at Tulum Archeological Zone

Tulum Archeological Zone is one of the most beautiful sites I have visited in Mexico. Maybe it was due to the clear morning weather, or the ocean (which I have not been to in four years), or even the sound of the waves. The site was filled very organized, with a clear pathway for pedestrian and a rope outlining the walkaway. I looked for the way to the cliff overseeing the beach and the ocean, where I stayed for fifteen minutes taking few photographs and admiring the landscape.

There is a small beach connected to the site, which seasonally hosts the nest for turtle’s eggs and is protected from human activity. If you are visiting the site in the morning, I suggest that first to go east to the cliff and then walk south to tour around and exit at the same entrance gate. This way, you could see the most beautiful section when there is less people around and still see all the site without walking through the same walkaway again and again.

I wished I had more time to just sit on the cliff and watch the ocean, but I had to rush back to PDC and catch my bus to Cancun airport at 11.35am. At nine, I walked back to the highway and luckily caught a service collectivo heading to PDC. It stopped at fewer places and dropped me off at the same station in PDC at ten to ten. I headed straight to the beach, to beachfront restaurant managed by INTI beach that I had spotted the day before for a brunch.

The staff greeted and welcomed me very warmly, letting me to seat on a plush sofa with umbrella on top facing the beach. I ordered an orange juice and looked at the menu afterwards to see their seafood selection. I relaxed a bit, watching beachgoers walking by, before ending up having a jumbo shrimp with a basilic rice and vegetables, which were delicious, and another glass of pina collada. After the meal, I still sat still and listened to the waves before leaving at 10.45am and grabbed my luggage from hotel, heading to the ADO bus station. 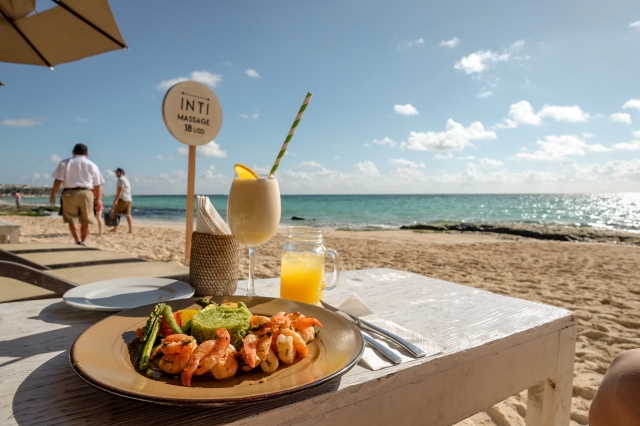 Cancun airport is very decent and clean, much better than those in Mexico City, Oaxaca or Merida, and also have many shops and restaurants inside the terminal. I bought a bottle of tequila for my girlfriend, and then had my caramel frappucino at Starbucks before sitting at my departure gate. As the flight takes off, I was thinking to myself how nice the last 9-days had been, and humming silently a song I have been listening to for the past two days:

“If you like Pina Coladas, and getting caught in the rain
If you’re not into yoga, if you have half a brain
If you like making love at midnight, in the dunes of the cape
I’m the love that you’ve looked for, write to me, and escape” 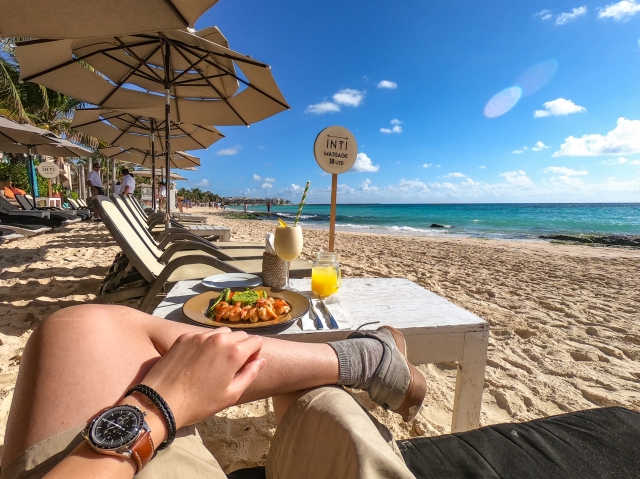 A global macro analyst with over four years experience in the financial market, the author began his career as an equity analyst before transitioning to macro research focusing on Emerging Markets at a well-known independent research firm. He read voraciously, spending most of his free time following The Economist magazine and reading topics on finance and self-improvement. When off duty, he works part-time for Getty Images, taking pictures from all over the globe. To date, he has over 1200 pictures over 35 countries being sold through the company.
View all posts by Journeyman →
This entry was posted in Mexico, Travel and tagged archeological, beach, chichen itza, itinerary, landscape, Mexico, playa del carmen, Travel, tulum. Bookmark the permalink.