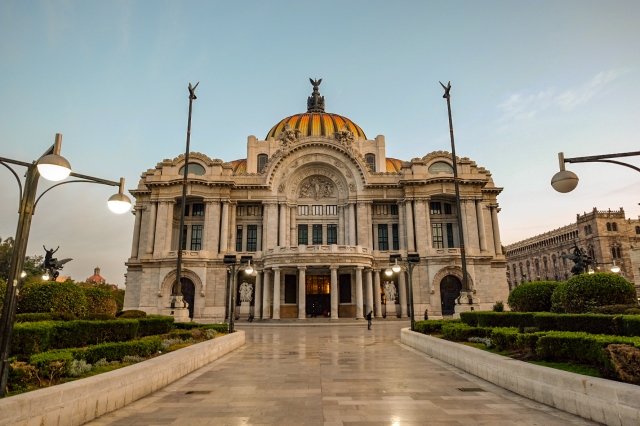 Beautiful architecture, lively street scene and rich history of human civilization are three factors that attract me to visit Mexico as my first travel destination in 2020. Having traveled extensively across South and East Asia with either of my parents in the past five years, we have always wanted to see this other part of the world across the Pacific Ocean. Unfortunately, traveling to Latin America from Asia is quite expensive and involves lengthy flight, which have successfully deterred us from exploring the region. All that changes when I moved to Canada three years ago. Now working as an investment strategist focusing on LatAm and EMEA countries, I have a more in-depth background of the country’s economic and social condition that I could relate during my trip from Mexico City to Playa Del Carmen.

The trip began with a flight from Montreal to Mexico City on Friday, January 17th at 10.40pm, with me bringing a cabin-size luggage and small shoulder bag for the trip. Since it was an off-holiday season, tickets were cheap; Montreal to Mexico City flight with Interjet cost around CAD$ 230 and the return trip from Cancun to Montreal with Air Transat cost around CAD$ 290. It is a four-hour direct flight, meaning that I arrived in Mexico City at 4 in the morning, preventing me from both exploring the city or checking-in to my hotel.

Mexico City airport is decent enough, but it simply wasn’t in the same class with a more developed Asian countries’ airport. I have exchanged pesos in Montreal, which has about the same rate with the USD to MXN rate in Mexico City, about 5-6% from the spot rate, a sizable tax on my purchasing power. Across the trip, the exchange rate in Playa Del Carmen is the best, offering to buy USD for 17.85 compared to 17.5 in Mexico City, Puebla and Oaxaca. This is at a time when the spot rate is at 18.7.

Anyway, I bought a taxi voucher from the stalls in the airport, costing me about $20 to the city. Driving at an empty street at 4 in the morning, the taxi driver managed to break every single red-light that he could find. The drive to my hotel, Kali Ciudadela, took around 15 minutes. It is a decent and conveniently located hotel in the city. I left my baggage in their storage room, do my morning routine and connect to their wi-fi to find 24-hour café, ending up with one across Palacio de Bella Artes, one of the sites where I have been planning to visit during the sunrise. I walked north from my hotel, but due to the dark, feeling of insecurity, lack of proper maps and location coordinate I got lost and ended up doing a circle one kilometer around my hotel. At that time, I was scared and cautious whenever I saw other people on the street.

After about fifteen minutes walking in the right direction, I arrived on the Western side of the large park beside Palacio de Bella Artes. There were police officers across the café where I have an egg and toast breakfast while waiting for the sun to appear. There, I also met a Turkish guy who has been working in Borneo for a mining company and is on a business trip to Mexico.

Breakfast at a cafe across the park

The sunrise was amazing that morning, with its cloudless and orange-colored sky. After finishing with my business (photography), I decided to walk South East to the Zocalo, or the main square, and passed the street with many stores selling international brands. Along the way is numbers of police officer and military personnel, which I knew have been directed by AMLO, the current president, to fight against crimes. In the Zocalo, I entered the Metropolitan Cathedral, together with the locals, to admire on its architecture.

Still enjoying the morning sun and chilly weather, I walked North to Santo Domingo Cathedral and Plaza Garibaldi, all the while observing what the locals are doing. Clearly, I have been underestimating the distance between places in Mexico City, which look small in my printed google maps I carried on my bag. At that time, taxi was scarce, and I haven’t bought a local SIM card at the time, preventing me from taking uber between places. 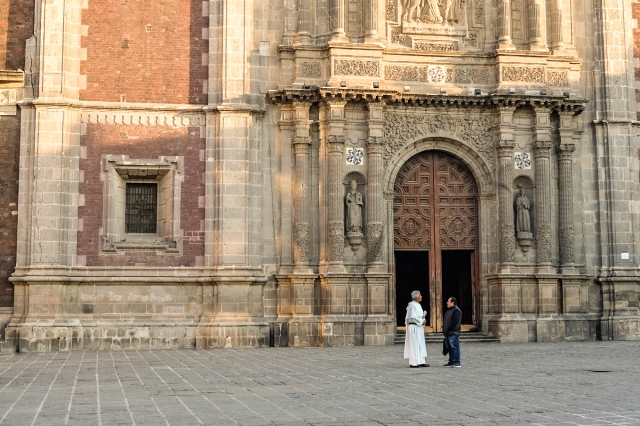 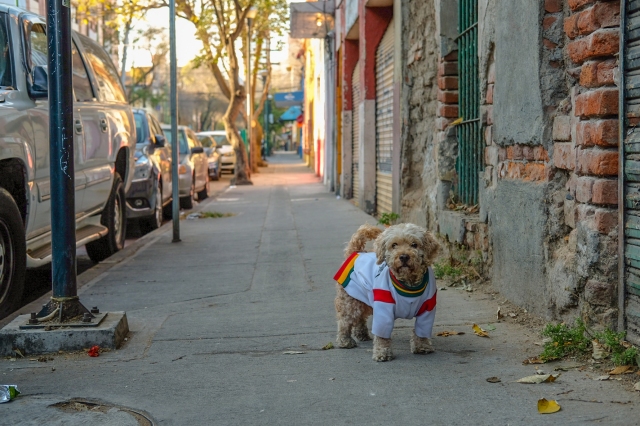 Little Fella on the Street

There is not much to see in Santo Domingo and Plaza Garibaldi, so I advanced myself to the next destination, Biblioteca Vasconcelos. Camera, other than phone’s camera, is not allowed in the library, preventing guests from taking a decent professional grade photographs of its gorgeous interior. I didn’t stay for long inside, but instead toured around the back of the library, where a small market selling mostly clothes is bustling with locals. Then I took a taxi to Bosque Chapultepec, a large park housing many museums. 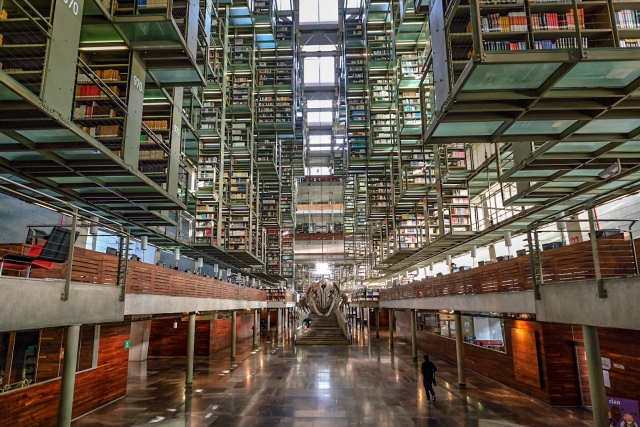 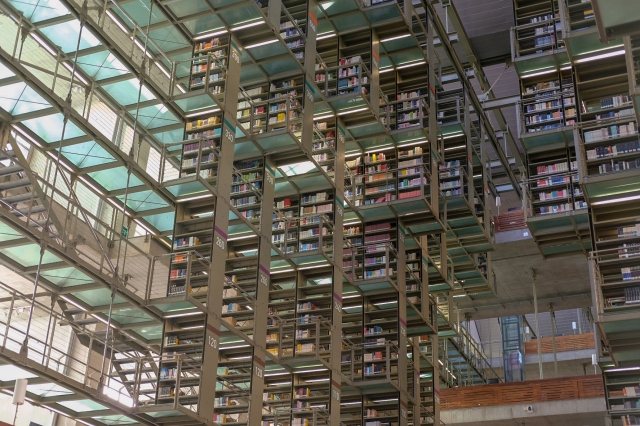 It was Sunday, so many people are jogging on the park with their shorts and tops. Meanwhile I was dressed in my long pants and light jacket I wore since my flight from Canada under the -23-degree Celsius weather. The nice thing is that in Mexico City, almost all large park has free wi-fi, allowing me to check google maps and reorient myself. Bosque Chapultepec, the park, is divided into two sections separated by a highway. There is a pedestrian bridge that connects both side, and touring both sides of the park took me roughly two hours of walking. My favorite part of the park is on the Southern side, where there is a fountain and roads located on a higher ground facing the cityscape.

I was tired from walking the whole morning and after walking for a while to the exit, I found a taxi dropping its passenger, which I immediately jumped into. With my broken Spanish I said to the driver, an old guy in casual t-shirt and hat with CEMEX logo on it, “Museo Soumaya, por favor”. Soumaya museum is a large and fancy building sponsored by Carlos Slim, Mexican richest man, containing paintings, watches, artifacts and other art objects in its seven floors interior. It was free to enter, but I had to put my bag on the deposit desk and carry around a little travel pouch containing my passport and money. 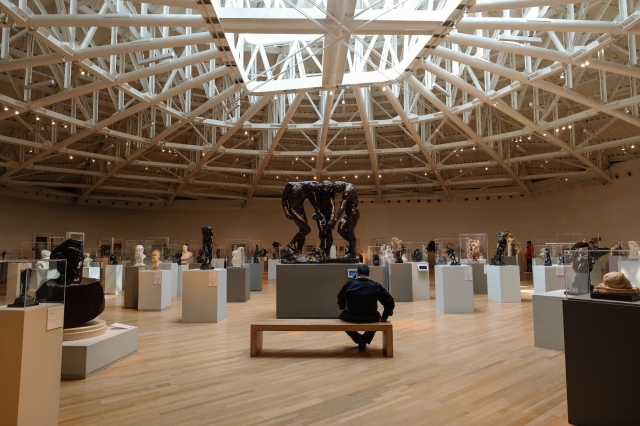 On the back of the museum is a shopping mall and cinema, where I sat for an hour while sipping caramel frappuccino and charging my phone to recover. For lunch, Mercado Roma was on my list. It is more of a fancy food court than a restaurant, where many vendors are selling tortillas with seafood, meats and drinks. I tried the pork tortillas, which taste great and cost MXN 40 each. Feeling satisfied, I took a taxi to Plaza del Toros, a bullfighting museum, that turned out to be uninteresting. 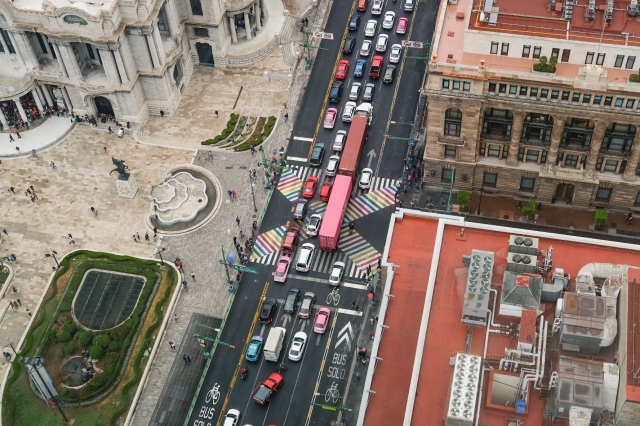 It was around 5pm when I took another taxi to Torre Latinoamericana, the tallest building in the city with an observation deck on the top, to watch the sunset. Although the view was great, it was packed with people and the queue to the top, top floor was quite long; there are two elevators we must take in order to get to the semi-open observatory deck. But from the top, I noticed that there is a rooftop terrace facing Palacio de Bella Artes that would be perfect to watch the sunset from, so I rushed down 30 minutes before the sunset and headed there.

That is when I met Enrique and his girlfriend, who invited me to sit with them and skip the long queue. I gladly accept and took few pictures before conversing with them about Mexican history and culture while sipping a carajillo, a mix of espresso and 43 liquor. We had such a good talk that they invited me to go for a dinner at La Opera (which is also on my list), one of the fancier restaurants in the city. After drinking few tequilas and a bottle of beer, and them teaching me how to properly make a quesadilla, they were again inviting me to come to a party on the Southern part of the city hosted by their sibling. Initially I refused, knowing that I must wake up early the next day for a hot air balloon ride during the sunrise, but somehow, I ended up having a really good time that night with them.

Me and local youngsters at La Opera

A global macro analyst with over four years experience in the financial market, the author began his career as an equity analyst before transitioning to macro research focusing on Emerging Markets at a well-known independent research firm. He read voraciously, spending most of his free time following The Economist magazine and reading topics on finance and self-improvement. When off duty, he works part-time for Getty Images, taking pictures from all over the globe. To date, he has over 1200 pictures over 35 countries being sold through the company.
View all posts by Journeyman →
This entry was posted in Mexico, Travel and tagged bella artes, cathedral, chapultepec, city, itinerary, latinoamericana, Mexico, palacio, soumaya, Travel, vasconcelos. Bookmark the permalink.