Last night sleep was great and rejuvenating. We woke up slightly late today and headed for breakfast downstairs, next to the hotel lobby. Our accommodation in Vientiane, S Park Design Hotel, is a well-preserved and clean three star hotel with a bar and restaurant next to it. Our room is spacious and overlooking the city, making us feel that we are staying at a 4-star rather than 3-star hotel.

We took our time and enjoyed a leisurely breakfast since our pick up time today is at 9 am. There were lots of Korean teenagers in the lounge, I’m counting 20-25 people, probably heading to Vang Vieng for the adventure. Around 8.45 am, we saw our tour guide already waiting in the lobby, so we met him and began our city tour in Vientiane, the sleepy capital of Laos.

The temples we visited in Vientiane are located close to each other, sometimes at a walking distance from each other. The first one was Wat Sisaket, a a yellow brick building surrounded by Buddha statues housed on the four side of the temple. Inside the temple is a large Buddha statue and a mat for prayer. Its inside walls and roof have a beautiful and detailed drawings of the ancient culture. As usual, photography is not allowed inside the temple and we have to put off our shoes when entering the building, so make sure you are wearing a comfortable and easy to wear shoes.

Within two minutes walking distance from Wat Sisaket is Haw Phra Kaew, which serves more as a museum rather than a temple, housing artifacts found across Laos such as Sanskrit writings on a stone dating back over 2000 years ago. Each of the temple we visited took around 10-20 minutes, with longer time if we are interested in learning particular aspect of the history.

Me and my mother in front of Haw Phra Kaew, Vientiane

Then we got back to our car and continued our tour to Pha That Luang, a gold-colored temple that was rumored to host a rib of the Buddha and is a national symbol of Laos. Like Wat Sisaket, it is surrounded by a structure housing Buddha statues on the four side of the temple. There were few women walking and chanting around the temple when we came, but other than that, the site was quite empty.

Next to the temple is a monastery where monks live and tourists are welcomed to visit, hosting a giant sleeping Buddha statue inside the complex. There were also statues telling the story of the Buddha with a monkey and elephant, a phase where the Buddha does not reach nirvana on the first meditation, when he went back to eating and was shunned by the people surrounding.

Pha That Luang in Vientiane, Laos

The next destination, located 10 minutes drive from Pha That Luang, is Patuxay Monument. Probably this is the best spot for photographer to see the whole cityscape and wait for sunset. Under the giant structure, there are shops selling ice cream and cold drinks, and also two staircases that lead to the top of the monument. On each level of the structure, you will find street vendors selling souvenirs.

The Fountain as seen from the top of Patuxay Monument, Vientiane 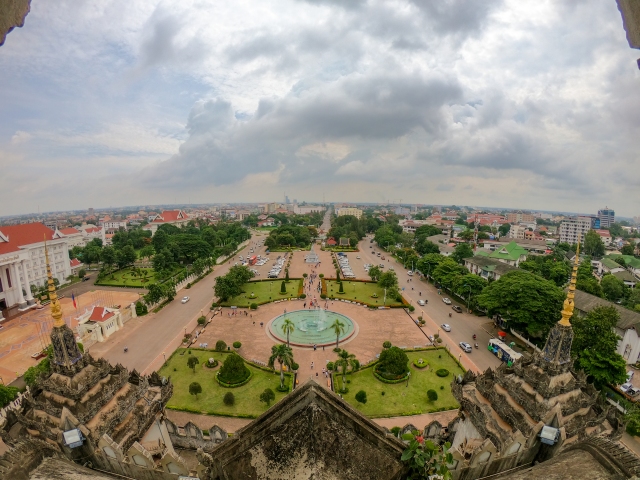 Vientiane cityscape from the top of Patuxay Monument

We finished the downtown Vientiane part of the city tour at around 11.30 am, so we headed to Buddha Park that is located 30 minutes away from the city. The name pretty much explain itself. The park is built by a priest-shaman in 1958 and contain 200 Buddha statues, each telling stories of Buddha’s life. The more interesting part of the park is the “demon head”, pictured on the second photograph below. It is a pumpkin-shaped structure where you could enter inside and hike the three levels of the head, each representing hell, earth and heaven.

Buddha Park from the top of demon’s head structure in Vientiane, Laos

Buddha statue and the demon head in the background, inside Buddha Park, Vientiane

The Buddha being a mediator between fighting groups

The Buddha park is located at the Lao-Thailand border, two countries separated by the Mekong river. We had this crazy idea to cross to Thailand and visit the closest city called Nong Khai for two reason: first, for the sake of crossing to Thailand and second, to go to Starbucks. Our tour guide gladly accompany us on our expense and we rented a car and driver on the Laos border for $30 (a mistake we later realized).

The border is full of middleman and drivers offering their service for a day trip, many of them with malicious intent, including the one in contact with our tour guide. Don’t get it wrong, our tour guide is a nice guy, but he is just prone to the scam. After the border control, our middleman escort us to one of the driver on the Thailand side and extract kickback money of $10-15 from the driver with the promise that we will pay $30 later on for a two hours trip. Our driver, trying to recoup more money, tried to scam us to pay THB 120 for crossing the Thailand border, when none should be paid. We didn’t fall to his scam and got our stamp on the border by paying THB 20/person to the immigration officer, a payment which legality we questioned, but was demanded nevertheless.

Once in Nong Khai, we drove to the shopping mall hosting Starbucks and got our fix. We went around the mall to look around and study the type of store available. Unlike in Laos, there are international fast-food chain such as KFC. Then we drove to Nong Thin public park, a green space in the city with giant lake in the middle. we walked around for 40 minutes and took some pictures before heading back to Vientiane.

Me and my mother with our fix in Nong Thin Public Park, Nong Khai, Thailand 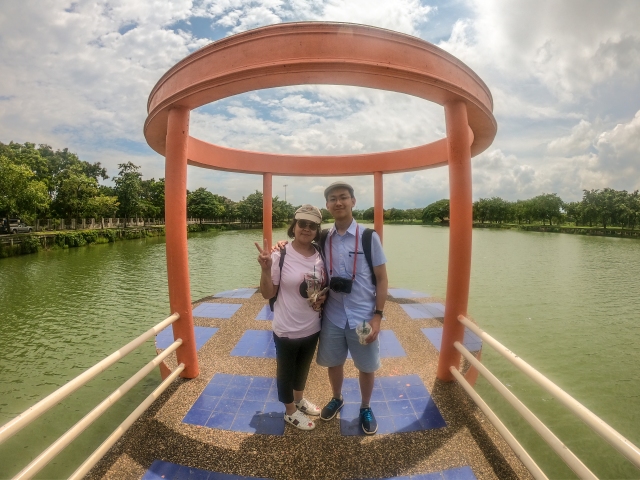 After crossing back, we met our driver and drove back to the city after having lunch on the road in between. We asked to be dropped at Hard Rock Cafe Vientiane, since we almost always visited Hard Rock at every city we have been through. It was just 3.30 pm when we finished our city tour and all of our itinerary in Laos! We headed back to hotel by tuk-tuk and took a shower afterwards.

Around 7 pm we went to Musso, a restaurant/bar next to our S Park Hotel, which turned out to be one of the best bar in Vientiane. I had a steak and my mother had a tom yum soup, both of which were good. There is also live music playing songs in the 80/90s and soon after a large group of Vientiane social-elite came to celebrate one of their birthday. An fan of luxury goods ourselves, we noticed thousand of dollars Hermes bag and fancy watches, things we thought we would not encounter on our trip here. Overall, I would recommend going to Musso for their live music and having a dinner in Vientiane, a perfect way to end our journey in Laos.

Kevin is a research analyst at a macro research firm and a private fund manager since 2012. He holds a Master of Management in Finance degree from McGill University and has passed all levels of CFA and FRM exam. Kevin is an avid traveler and photographer, with a record of 33 countries visited in 2019. He is a freelance contributor at Getty Image and is running two website in his spare time, journeyman.live and putamencapital.com
View all posts by Kevin →
This entry was posted in Laos, Travel and tagged border, buddha park, city tour, itinerary, Laos, musso, nong khai, patuxay, sisaket, vientiane, wat. Bookmark the permalink.