Kuang Si Waterfalls in Luang Prabang, Laos
This morning we took a flight from Singapore to Luang Prabang with Scoot airlines, one of the budget airlines serving a more exotic destination in SE Asia. Our flight took about 3 hours, afterwhich we arrived at the relatively small airport of Luang Prabang.

The airport could accomodate up to three aircraft connected to the building, and it gives a pleasant view of the surrounding. First thing we noticed arriving in Laos is the weather! We visited in June and the air is very hot and humid. During the queue for immigration, there was a funny incident where a cockroach suddenly appears and scared bunch of Singaporean girls. I guess they’ll have more of such incident during their stay.

The immigration process is quite slow in the airport, but all is orderly. Laos exempted visa for tourists from several countries, including Indonesia. Visa on arrival is available for US$30 and you have to bring a 4×6 photo with a white background. Our tour guide, Mr. Southone, has been waiting for us in the pick-up point with a large banner of my name printed. We introduced ourselves and proceed outside to our car, under the humid 39 degree Celcius weather, heading to the Sanctuary Hotel for check-in. It is a nice, bungalow type hotel in the downtown area of Luang Prabang.

We have our lunch in a small restaurant within 5 minutes walking distance from the hotel called Lotus. Food price is decent, meal for two cost us 89.000 Kip (US$ 10), which would not even be enough even for a regular meal in Montreal! Our guide, Mr. ST as we would call him, suggested that we shifts some schedule to accomodate with the weather and first visit Kuang Si Waterfalls today, which we happily obliged. 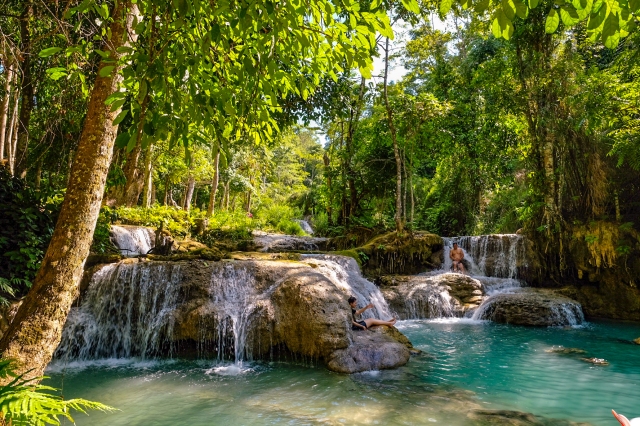 We started the drive from downtown to the waterfall at 13.30, which took around one hour, passing through farms, school, Pullman Hotel, etc. There were local restaurants in front of the entrance gate, selling both soft drinks and ice cream. Kuang Si Waterfall is a complex which also includes a small bear conservation site. To go through all the site, you could trek uphill to the waterfall and then walk down following the wooden bridge path. I was coming on Saturday, hence there were also some locals populating the site. Most of the guests are either swimming or simply dipping inside the cold and crystal clear water, which was a bliss under such weather.

Me and my mom at Kuang Si Waterfalls in Luang Prabang, Laos

We went back to our hotel for a 90 minutes break afterwards, where we took a shower and lighten our backpack to hike Mount Phousi to see the sunset. The sunset in Luang Prabang is at 6.48pm in June, giving us plenty of time to walk up the staircases up the hill. For those not used to exercising, like my mother, you may want to jog for a week before traveling to avoid muscle sore during the trip. 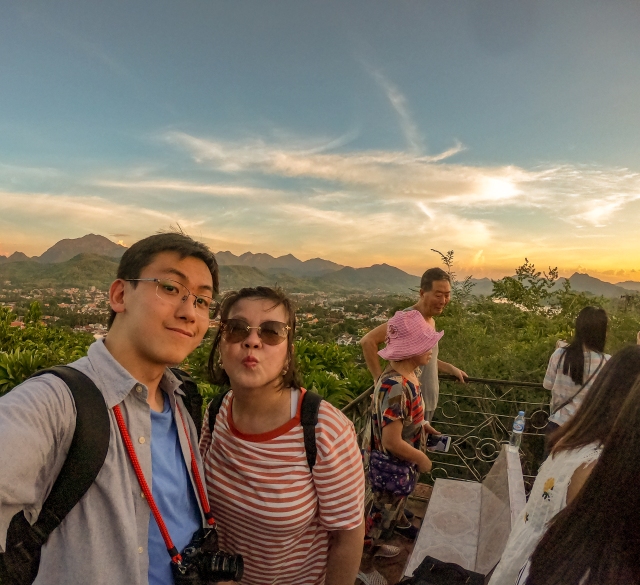 Me and my mom at Mount Phousi in Luang Prabang, Laos

We spent around 90 minutes on the top of the hill, taking 360 degrees photo of the city and the mountains surrounding it. You want to be early to have a good spot for taking photos during the sunset, however using a tripod is nearly impossible. There is also an open section on the Southern part of the terrace where you could stand on a rock facing the river for a self portrait, which is the most crowded part of the terrace.

The top of Mount Phousi in Luang Prabang, Laos 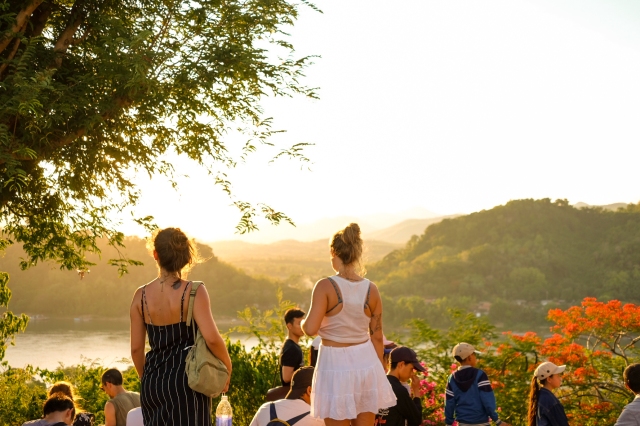 Waiting for Sunset at Mount Phousi in Luang Prabang, Laos 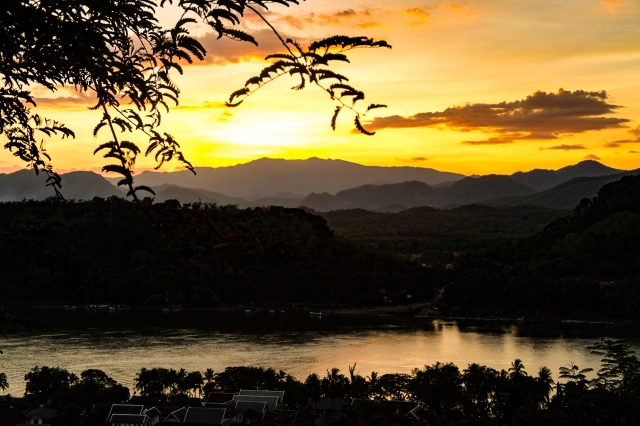 Climbing down the staircases after the dusk, we arrived at Luang Prabang’s Night Market, populated mostly by vendors selling souvenirs. To be frank, it is rather uninteresting due to all of them selling similar goods. It was almost 8pm and we were tired and full of sweat, so we decided to head for dinner at the Blue Lagoon, one of the top restaurant in the city according to TripAdvisor. The restaurant is located in an alley nearby the night market, decorated by Western books and is air conditioned. We have a duck wrapped by banana leaves and fried vegetables, costing us US$20 for two person.

Night Market in front of Wat Mai in Luang Prabang

For the whole day, we have been surviving without Kip, using small denomination of USD along the way. However, we have been on disadvantage since the exchange rate was not very favorable in shops and restaurant. Across Avani+ hotel, there is a money changer with very favorable rate (1$=8750 Kip), above those of the spot rate in google, so we exchange our dollar there and headed back to hotel.

A global macro analyst with over four years experience in the financial market, the author began his career as an equity analyst before transitioning to macro research focusing on Emerging Markets at a well-known independent research firm. He read voraciously, spending most of his free time following The Economist magazine and reading topics on finance and self-improvement. When off duty, he works part-time for Getty Images, taking pictures from all over the globe. To date, he has over 1200 pictures over 35 countries being sold through the company.
View all posts by Journeyman →
This entry was posted in Laos, Travel and tagged itinerary, kuang si, landscape, Laos, luang prabang, mount phousi, night market, photography, Sunset, Travel, waterfall. Bookmark the permalink.