If there was ever a plot on my trip, today is the ﬁrst chapter of the climax, because it is a part of the trip that I have been most excited about, even more than seeing the aurora borealis in Yukon. I’m a fan of doing things in the old school way because sometimes that is the best way of doing things in life, like going to barbershop for my haircut and travelling with an actual paper map instead of using google map. Heck. I even still wear a mechanical watch and dress conservatively. And yes, it also means that I like to travel in the old school way, not by horse and carriage, but by train. This way, I could enjoy the scenery along the rail track and enjoy some telephone services along the way. 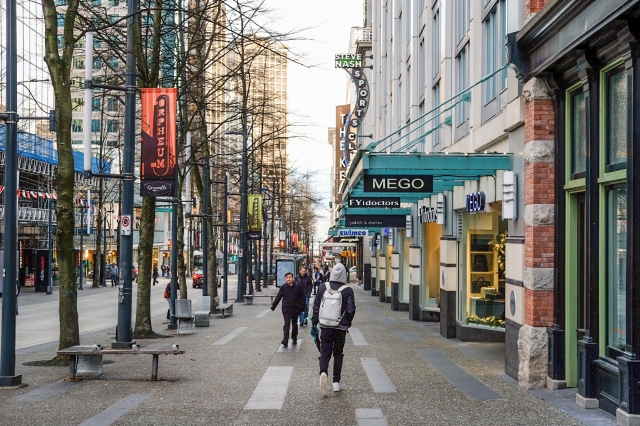 Granville Street in the Morning, Vancouver

Vancouver’s Chinatown in the Morning 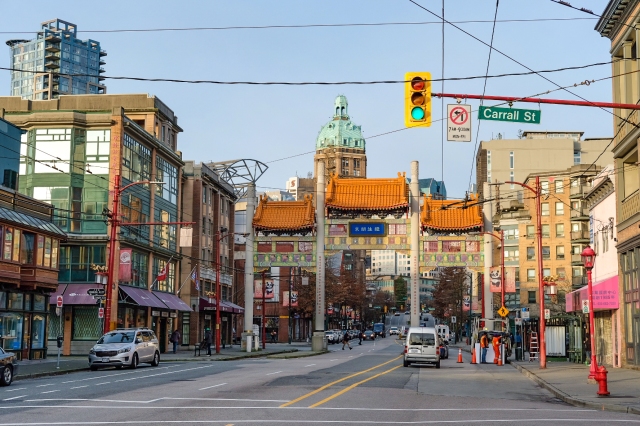 Vancouver’s Chinatown in the Morning

On Friday, I’m embarking on a 5 days train ride from Vancouver to Toronto, a route that spans 4466 Km and passes through 5 Canadian provinces and popular cities such as Jasper, Edmonton and Saskatoon before ﬁnally arriving in Toronto. The train departs at 12.00 from Vancouver’s Paciﬁc Railway Station, located at the Eastern part of downtown Vancouver. 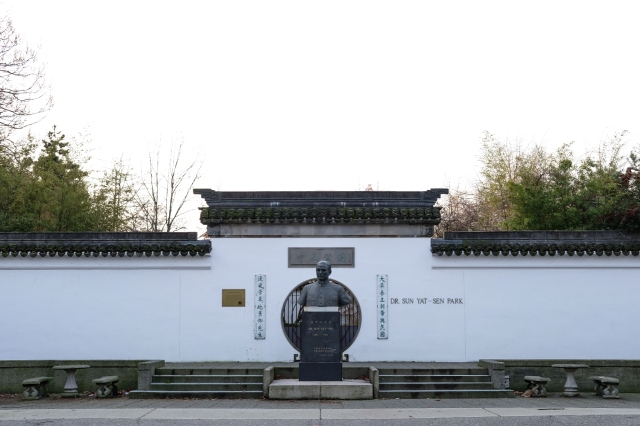 Before going to the train station in the afternoon, I went to Chinatown to have a dim sum for breakfast, expecting that the food on board will be less appetizing, an assumption that was proven to be wrong. 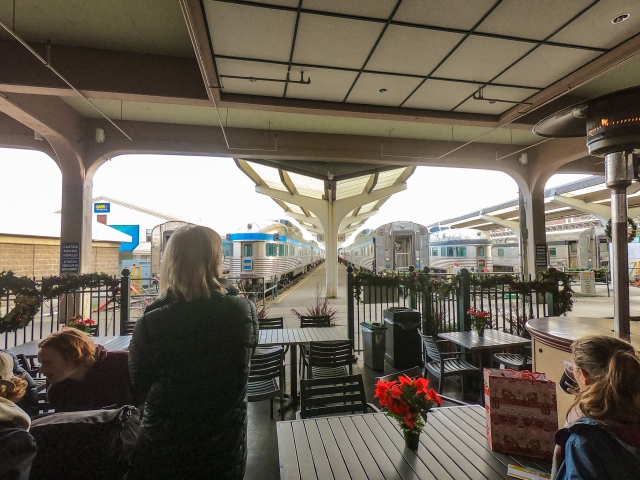 I arrived at the station one hour before the departure, all of the attendants were busy serving the guests and the seats on the lounge were packed. I queued on the service desk in front of the lounge and waited for the attendant to scan my ticket and give me the meal voucher for lunch. Since the route from Vancouver to Jasper is a crowded one, the lunch was divided into 3 sections (at 12 pm, 1 pm and 2 pm). I chose the ﬁrst session despite already having a big breakfast just an hour earlier.

My First Lunch On Board with an Australian Couple 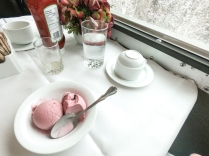 Various Meal Served on Board During the 5 Days Trip

On the lounge I met Mark and Lisa, the Australian couple I met a day earlier on the city tour, who were heading to Jasper to spend their Christmas there. Half an hour before the scheduled departure time, we were allowed to board our train. The train comprised of 24 cars, including 3 locomotives that pull the whole set. There were also 3 domed-glass car where we could enjoy a higher point of view to enjoy the scenery, each car accommodates 24 people. During the trip from Vancouver to Jasper, the seats were always full, so you have to get there early in the morning to reserve the seat. I did exactly that after the 6.30 am breakfast the next day.

Landscape Nearby the Canada-U.S. Border in British Columbia

That’s Me in The Observation Deck

The second car was actually almost empty, as most people was not aware of its existence yet

I traveled on the sleeper class, more speciﬁcally on the upper berth due to my budget constraint. I knew that I don’t want to travel economy for 5 days (last year travel from Montreal to Halifax for 23 hours ride was not very comfortable, especially for sleeping), but I also do not want to blow my budget only for the train ride. Luckily I got my ticket discounted due to the Tuesday promotion VIA Rail has. Traveling on the sleeper class means that you got access to a single bed, bathroom, 3 meals each day and other free stuff on the canteen (tea, coffee, juice, biscuits, etc.).

Sunset Nearby the Canada-U.S. Border in British Columbia

Most of the day, I spent my time enjoying the scenery on the domed-glass car while listening to the music, then reading or writing this post at night. Before or after the lunch, usually passengers are gathering on the canteen while waiting for the lunch call. This is usually where the conversation happens among us.

The Alley from My Upper Berth

The Bed in Upper Berth

The Bed in Upper Berth 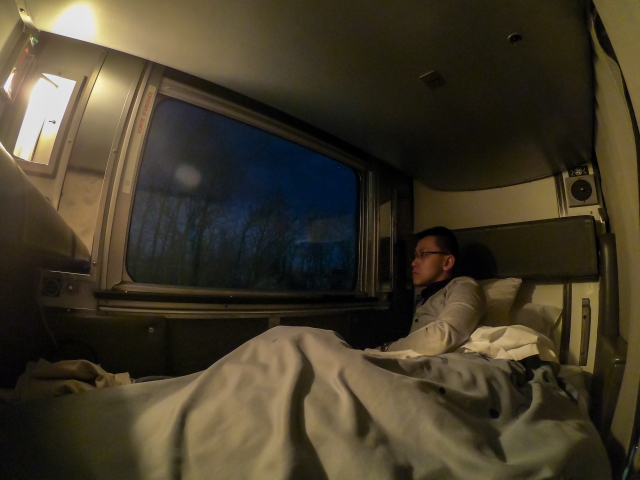 The Bed in Lower Berth (I got upgraded after Jasper) 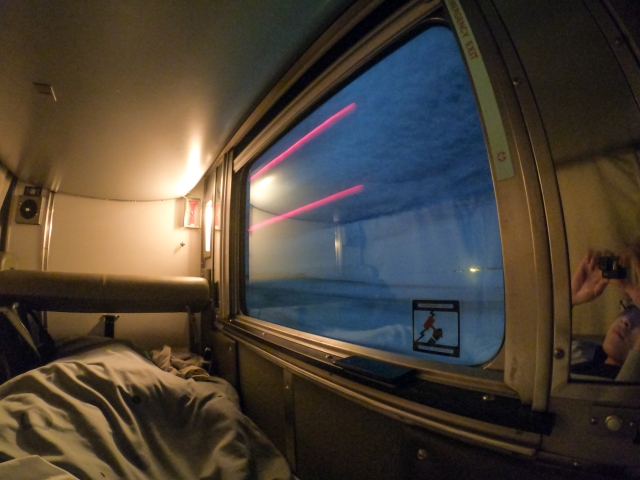 Window in the Lower Berth

I was traveling alone, making it easier for the attendant to assign me a seat for the lunch. Usually I was assigned to the table with a couple and another lone traveler. During the ﬁrst four days, I was rotating between tables for breakfast, lunch and dinner. I talked with few Australian couples, retirees, grandpa and grandma visiting their children for Christmas, and even a Jewish lady that moved to Canada after the Nazi prosecution in the 60s. Stories were told, history revisited and laughter roared across the room. I would say that the people traveling on the train made the ride more enjoyable, each of us sharing our own stories. 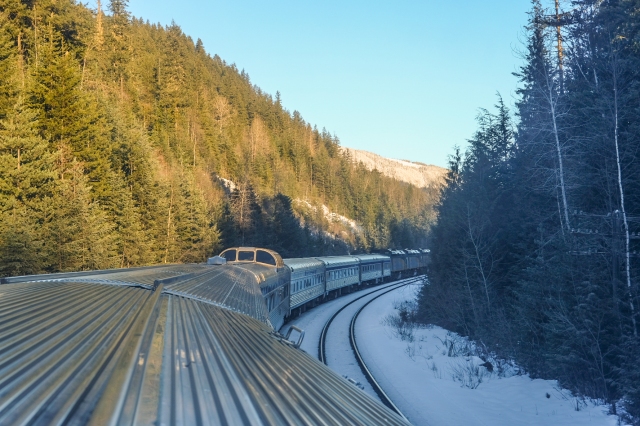 The Train Passing Through Alberta

The Morning View Passing Through Alberta 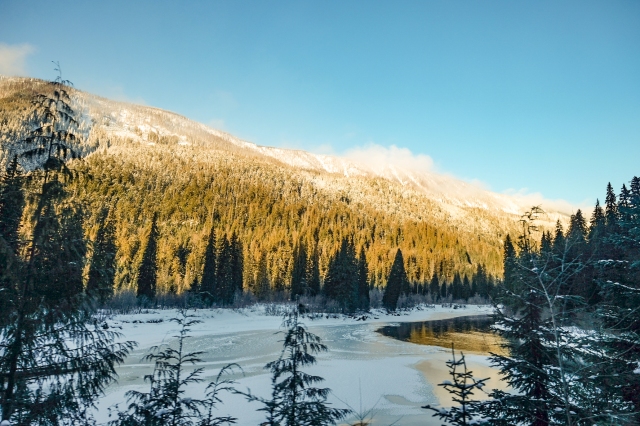 Trees and Snow in Alberta

When I asked people why they took the train instead of ﬂying, various reasons come up. The Jewish lady told me that she just got a brain surgery and was not ﬁt for ﬂying, a girl in her 30 who was suffering from cancer also quoted the same reason. Others said it was for the leisure, the same reason I had.

The View from the Observatory Deck in the Morning

The View from the Observatory Deck in the Morning

My usual day would start with breakfast at 6.30 am, then going up to the domed-glass car and wait for the sunrise while listening to the music. Sometimes I would check my emails and other news if the signal on my phone is strong enough, which happened occasionally during the trip. I also bring a book with me, which I read before bed or whenever the sky was dark. 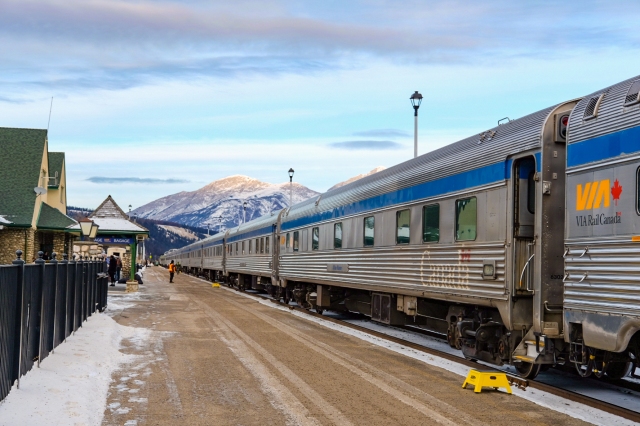 One Hour Stop in Jasper

Landscape from the Jasper’s Station 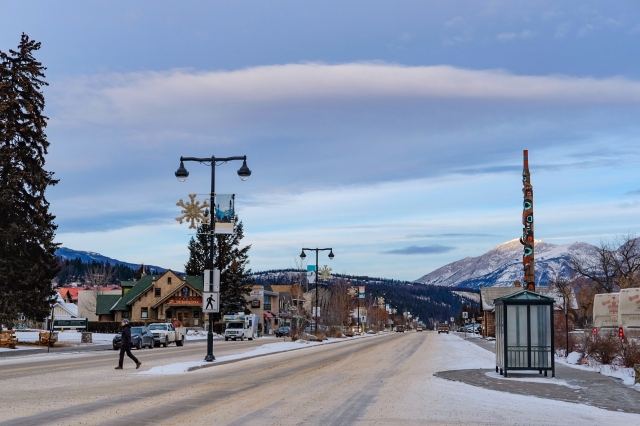 The trip from Vancouver to Jasper was much more crowded compared to the rest of the journey, so if you have not got the chance to sit on the domed-glass car so far, you will have the chance to do so after the stop in Jasper. It was said that the train is 300 people lighter after dropping off the Australian tourists in Jasper, including my friends Mark and Lisa. The food, arguably, was also better in terms of choices and servings after the stop in Jasper. 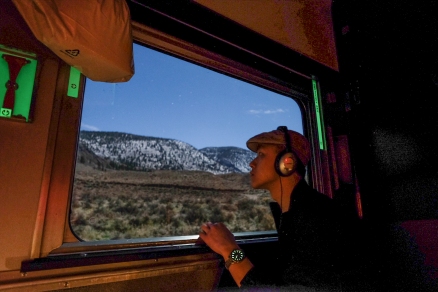 The scenery across Alberta was mesmerizing, the lakes and trees were covered in white and there were few clear shots for photographers along the way. The foods were all amazing to me too, which look and taste more like a hotel’s restaurant than a kitchen on board of a train. I tried lots of foods I’ve never eaten before like a bison burger. The servers were all friendly and nice too, asking our preferences of meals and drinks on every sitting. Overall, I would give a ﬁve star rating to the quality of food and staff.

The Mountain at Night, Alberta

At night, I got a good night sleep as well in my spacious bunk bed, contrary to complaints from few passengers. I have to admit though that sometimes when we were passing the prairies and tried to gain some time after delays, the ride could be a little bumpy. But nevertheless, I usually overslept until 9-10 am, skipping breakfast.

To the Sunset and Beyond

The attendant responsible for each car would transform the passenger seats into a bed around dinner time, and reverse it back during the breakfast time. They also provide amenities such as towels. Toilet and shower room were regularly cleaned, something I noticed during the 5 days journey.

My only complain is about the lack of electrical socket in the passenger seat for berth class. For those in cabin, you could charge your electronic device inside your room, but for berth passengers, you have to go to the canteen or bathroom to do so. For me, charging 2 cameras, an iPod and a smartphone mean that I spent quite some time in the canteen waiting for them to be fully charged every two days. 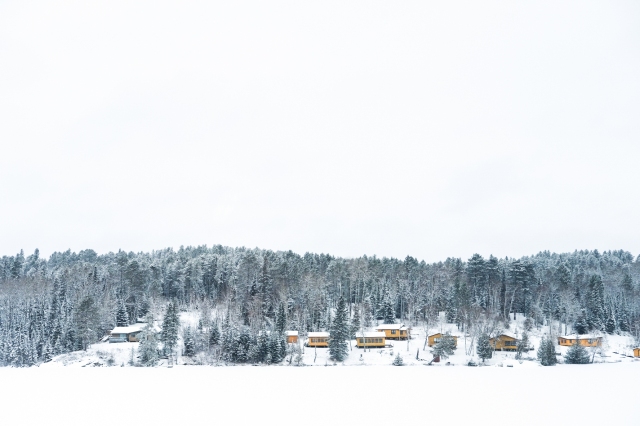 Green and White in Ontario 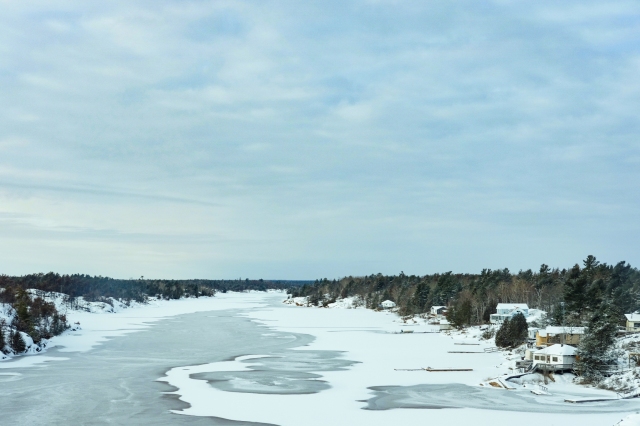 At the end of the trip, the two lady with whom I traveled from Vancouver from 5 days ago said goodbye to each other. Before debarking from the train she said to me, “initially we thought of it (the train ride) as a way to get from point A to B, but it turned out to be a journey on its own”.

End of the Road, Ontario 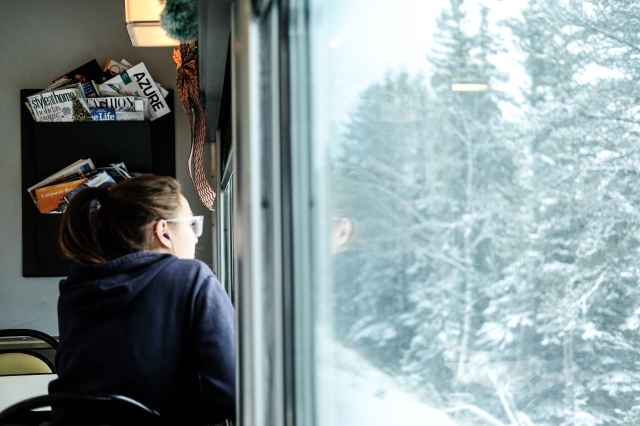 *At our worst, we had 12 hours delay to Edmonton, but after that we constantly gain some time and arrived at Toronto Union Station with only 2-3 hours delay. So be advised to spare some time for delay in your itinerary. Look for Tuesday’s discount before buying the tickets and thank me later.

A global macro analyst with over four years experience in the financial market, the author began his career as an equity analyst before transitioning to macro research focusing on Emerging Markets at a well-known independent research firm. He read voraciously, spending most of his free time following The Economist magazine and reading topics on finance and self-improvement. When off duty, he works part-time for Getty Images, taking pictures from all over the globe. To date, he has over 1200 pictures over 35 countries being sold through the company.
View all posts by Journeyman →
This entry was posted in canada, Travel and tagged alberta, canada, jasper, landscape, le canadien, photography, review, ride, toronto, train, vancouver, via rail. Bookmark the permalink.