“Sunrise in the 9th Century” 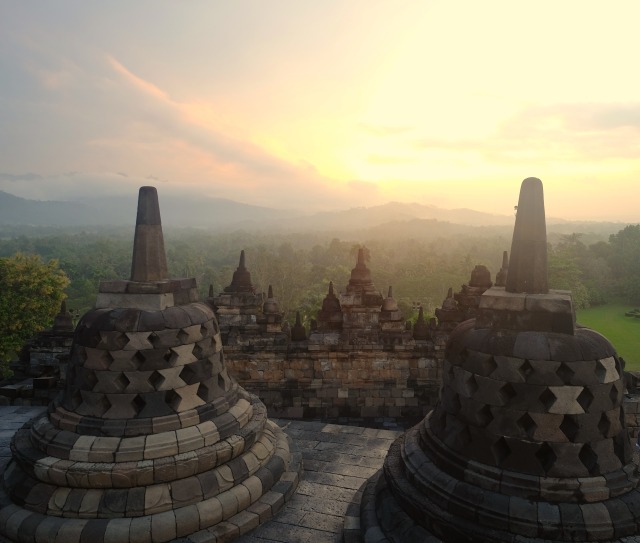 I wonder if the sunrise people see one thousand ago is the same with the sunrise we see today. And I wonder if ancient civilisation is attracted to sunrise and sunset as we do, whether the sky’s exquisite charm has always been the same since the start of mankind. The question came up to me while I was browsing through my old photographs, particularly the one I took on April 2016. As I took so many photographs in my life, I often forget the collection I have, leaving my stunned to find a beautiful photograph I took in the past. Then I remember the trip in details, it was when my father and I toured around Central Java to see Borobudur Temple.

Borobudur is the biggest Buddhist Temple in the world, it was once abandoned for centuries, covered by volcanic ash and jungle surrounding it. It was rediscovered in 1814 when Java was under control of British Empire, then it was restored by the Dutch and preserved until today. On my trip to this ancient temple, I remember waking up early in the morning and walked from our hotel outside the Borobudur complex for about half an hour to the temple. After registering, we were given a flashlight and proceeded to enter the temple along with other tourists wanting to see sunrise from the top of Borobudur.

The air was cold during the dawn, but the wind was calm. There were many stairs to the top of the temple, we carefully manage to climb them one by one in the dark. We reached the top when it was still dark and waited patiently, sitting on the edge of the layered floors facing the East. We could hardly see the surrounding, except few lights far away coming from the villages. Then the sun starts to ascend behind the mountain and lights the trees and stupas, it was during that time I took this photograph. Facing certain direction, there were only nature to be seen, neither electrical cable nor telco tower was in sight. Somehow, I want to believe that the landscape I saw is the same landscape ancient civilisation see in their lifetime.

This photo is available for sale (in digital format and prints), for inquiry contact kyky909@gmail.com

A global macro analyst with over four years experience in the financial market, the author began his career as an equity analyst before transitioning to macro research focusing on Emerging Markets at a well-known independent research firm. He read voraciously, spending most of his free time following The Economist magazine and reading topics on finance and self-improvement. When off duty, he works part-time for Getty Images, taking pictures from all over the globe. To date, he has over 1200 pictures over 35 countries being sold through the company.
View all posts by Journeyman →
This entry was posted in Photography Journal and tagged ancient, borobudur, buddha, central, indonesia, java, landscape, mountain, nature, sunrise, temple, Travel. Bookmark the permalink.

3 Responses to “Sunrise in the 9th Century”