Today I woke at 6.20 and was little late to watch the sunrise from our hotel balcony (Harmony Riverside). We had breakfast at the rooftop, just like yesterday, but more windy. We then went to a pier and took a boat ride for 1 hour to Mekong island. We were supposed to cycle around the island, but we take a tug-tug instead to avoid problems in the road (flat tire) and accident potential, not to mention the energy expended. In the island, we ride to the beach where people have picnic during holiday season.

Beach at Mekong Island
We continued to visit two silk weaving workshop, one traditional shop and the other is an entertainment complex. At noon we finished the tour of Mekong Island and went back by ferry and tug-tug to Phnom Penh. It cost $10 for the island ride and another $12 from the island to Phnom Penh.

Today we ate at Noodle House, a tripadvisor recommended restaurant few blocks from the riverside. It was good and clean, but we actually prefer David’s Noodle nearby. Our tour ended at lunch, so we went back to hotel and my father insisted on going back to Nagaworld. We tour around the hotel first, the rooftop swimming pool, duty free shop in the underground and the restaurants in the second floor. We bought nothing though, despite the availability of many Rolex’sand Omega’s. We stayed in the casino for two hours, I lost $13.

At 4.15, we exited the hoteland headed to Sokha Hotel 30 minutes away. Sokha Hotel has a nice rooftop bar facing the river and whole city, if you like cityscape, this is the place to visit in Phnom Penh. It took $6 for me to get there by tug-tug. We also had pizza and ice cream on the bar, with couple drinks totaled $28.75. 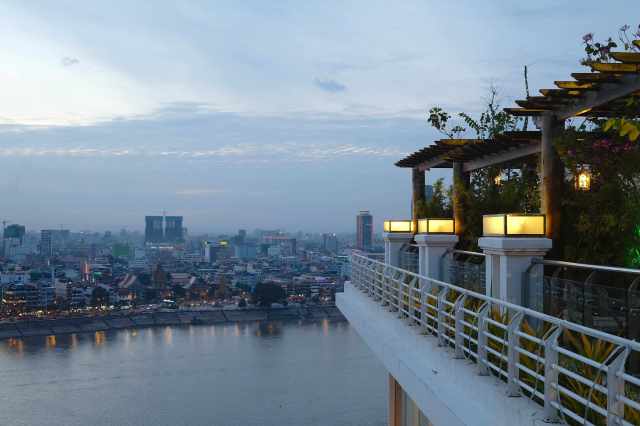 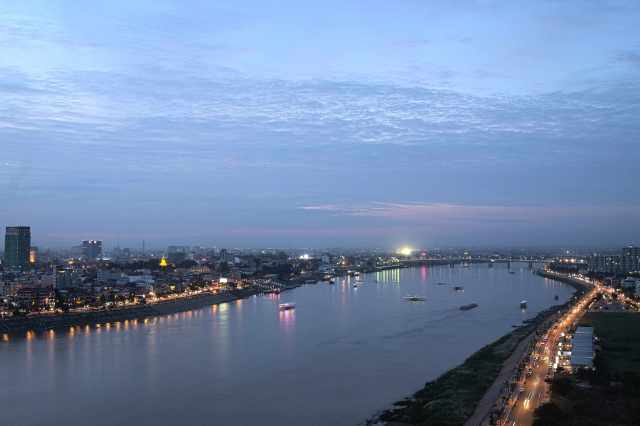 Christmas Tree in Sokha Hotel, Phnom Penh
After the sunset, we went back to the city with the same tug-tug driver. We gave him $10, considering he was waiting for us and the trip was quite far. We stopped at Diamond Island, where locals were having a drink and hangout. We went back to Nagaworld afterwards, I won $0.80 and got free drinks on the casino. It was late 9 pm when we finsihed eating in the casino and headed for the hotel to have massage and sleep

A global macro analyst with over four years experience in the financial market, the author began his career as an equity analyst before transitioning to macro research focusing on Emerging Markets at a well-known independent research firm. He read voraciously, spending most of his free time following The Economist magazine and reading topics on finance and self-improvement. When off duty, he works part-time for Getty Images, taking pictures from all over the globe. To date, he has over 1200 pictures over 35 countries being sold through the company.
View all posts by Journeyman →
This entry was posted in Cambodia, Travel and tagged Cambodia, diamond island, mekong island, phnom penh, photography, silk, sokha hotel, Travel. Bookmark the permalink.