Today we started our tour at 8 am, after having a decent breakfast at Dingar Hotel in Mandalay. We were going straight to Mingun by boat, so we stopped at a beach and have a boat hopping experience to get into the farthest boat on the dock. The boat ride from Mandalay to Mingun takes quite long, about 1 hour ride, vice versa. Along the boat ride we could see fisherman hut in the deeper water and landscape of fields, getting closer to Mingun we could see a giant unfinished pagoda named Mingun Temple.

Boat dock from Mandalay side

Another boat cruising beside our boat on the way to Mingun

Our boat was docked in nearby land and we got to pay tourist fee. We get closer to Mingun Temple, built by a King but left unfinished due to lack of human resources until he died. There was an earthquake in the past, leaving a crack on the front wall. Walking from Mingun Temple for 5 minutes, we see another pagoda and Mingun Bell. It is the second largest bell in the world, the first one is in Moscow. But the Mingun Bell could actually produce sound while the one in Moscow cannot. 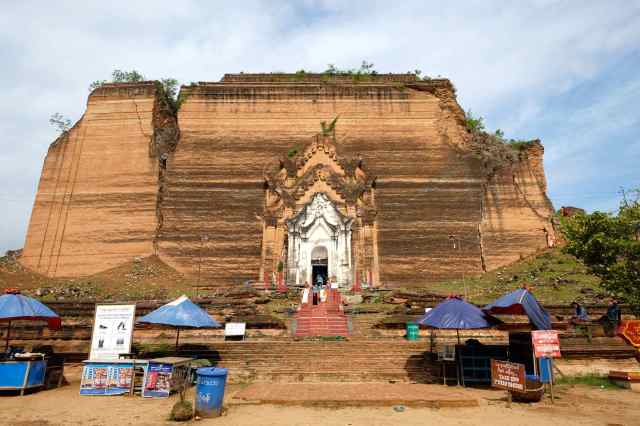 A pagoda 5 minutes away from Mingun Temple

Mingun Bell, the second largest bell in the world

Another 5 minutes walk from Mingun bell, we arrived at a beautiful pagoda named Hsinbyume. It is a white colored, wavy structure pagoda, on the top there is a Buddha statue and kids selling flowers to be given to the Buddha for 500 kyat each. We could also see the whole landscape from the top of Pagoda, where we met a group of Taiwanese lady asking us to take photographs for them. That is all the worth-visit sites in Mingun, as it is a small village and we met only few tourist on our walk. 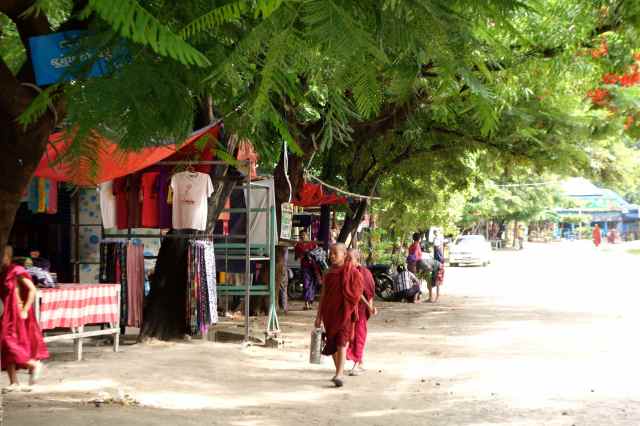 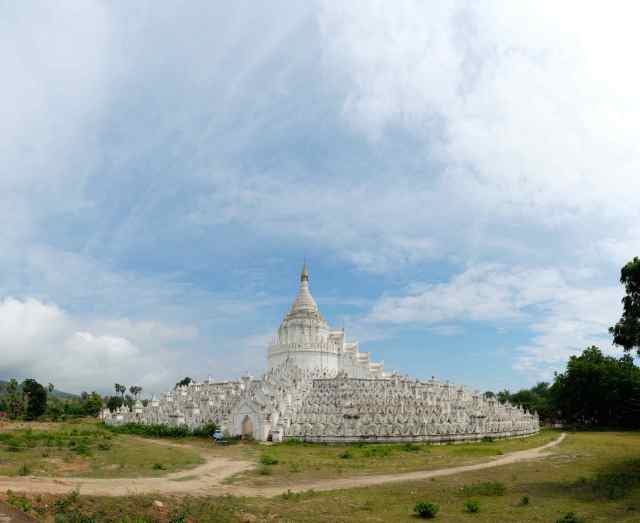 Hsinbyume Pagoda, one of the most beautiful pagoda in Myanmar

Landscape from the top of Hsinbyume Pagoda, Mingun

We rode the same boat back to Mandalay, I listened to music and enjoy the scenery from the lower deck of the boat due to the hot weather. The boat ride does feels long the second time, once we were on the shore our car has already waiting to take us to money changer and eat at a local restaurant in the city. 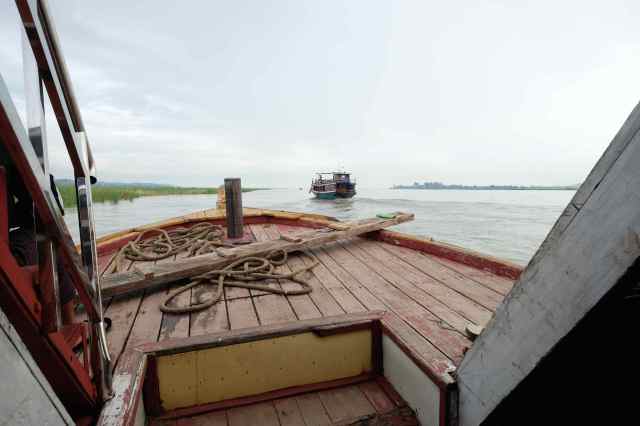 Our boat deck on the way back to Mandalay

The food in Mandalay cost around 6000 kyat ($5) per meal in a decent restaurant and almost everywhere served a fried rice on the menu. We visited a woodcarving workshop after lunch, continued by Maha Myat Muni Image, a temple where many people sticks a gold paper to the Buddha statue to attract a good deed. The temple was moderately large and there is also paintings museum which tells story about Buddha and the King. 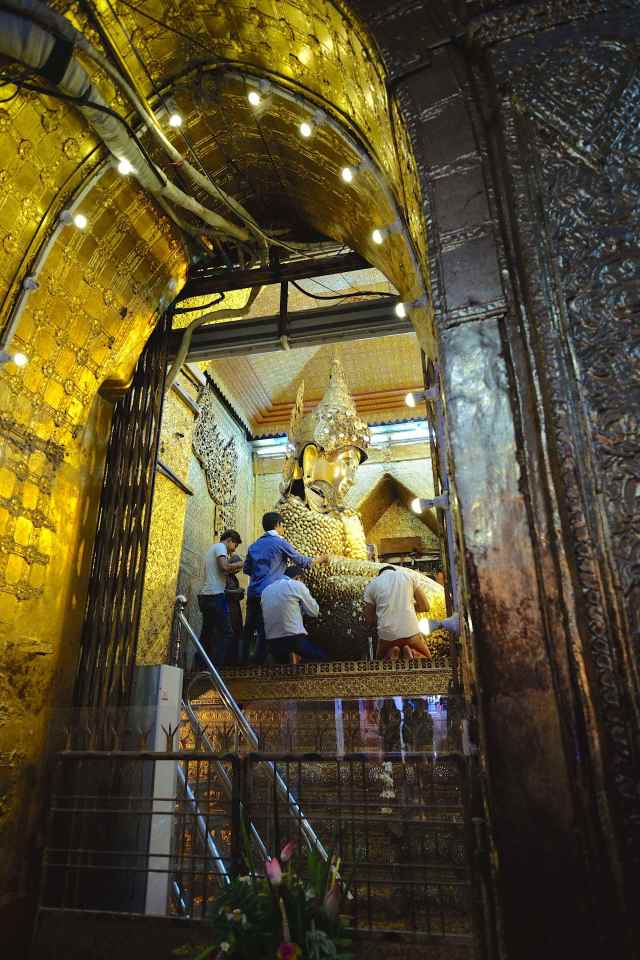 It was one o’clock in the afternoon and the weather was hot, so we headed to gold paper workshop to see how the very thin gold paper is being made from a solid gold. It was 5 minutes away from Dingar hotel, our staying place in Mandalay. As usual, we were given a time to rest in the hotel until 3.30 pm. We took a quick shower and rest for a while. 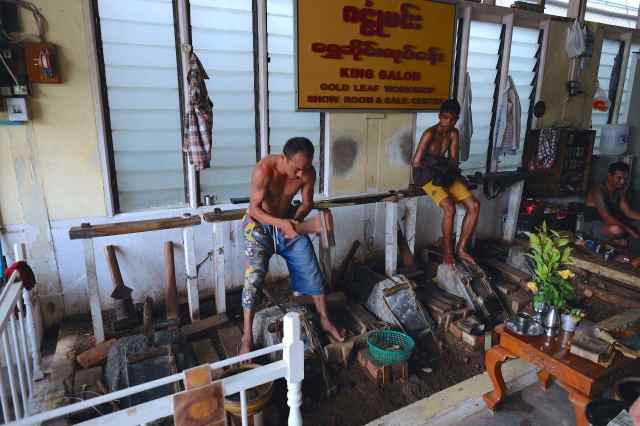 Workers stomping on the gold paper to make it thinner

On the evening we were picked up and continue the city tour to Old Palace. It was the biggest complex in Mandalay and occupied by the army, we were sightseeing around and learning the history of Mandalay from two Kings period and how the British conquered northern Myanmar without a single bullet. The structure of the complex looks similar to Palace in China and Korea, however the palace has been rebuilt due to fire in the past, except for one building that is being moved and donated as a monastery, which happened to be our next destination. 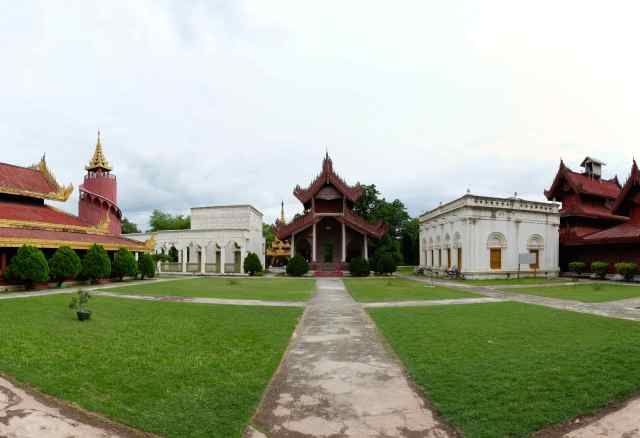 It is a wooden building with very detailed decoration across the door, wall, window, and roof. We aren’t allowed to touch any part of the temple, because it was covered with gold and our sweat oxidates the layer. It took us less than 15 minutes to tour around the small building, we then continued to Kuthodaw. 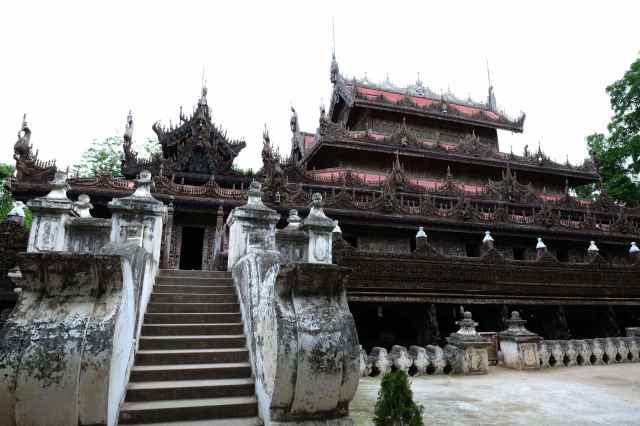 The only original building from Old Palace

Kuthodaw is included in the Unesco World Record for the biggest book in the world. Inside the complex are 739 white-colored pagoda with a writings inside the structure. The symmetry between one pagoda to the other is great, the biggest golden pagoda looks like a smaller structure of Shwezigon Pagoda in Bagan. Were the 739 writings are put on the top of the other, its height will be equivalent to 20 floors building, the reason of its Unesco record. 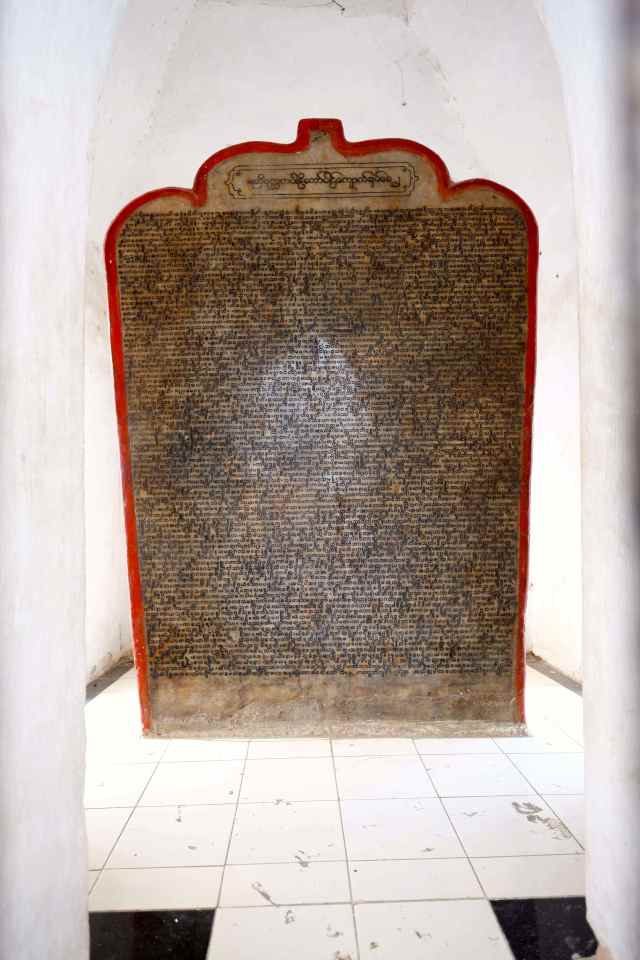 A script inside every pagoda in Kuthodaw, the reason it is called the world’s thickest book

At 5.15 pm we leave Kuthodaw for Mandalay Hill, where we will watch the sunset. Mandalay Hill at sunset is a must visit for tourist in Mandalay, the landscape facing North is simply AMAZING, with the lights creating a gradation of green and yellow on the rice fields. We spent almost two hours there, capturing 360 degrees view of Mandalay city and durrounding landscape.

Mandalay Hill taken from the city 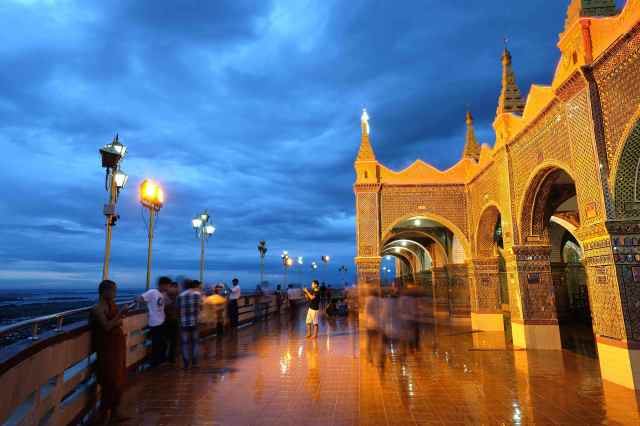 My favourite photograph in Mandalay, a vast green landscape beautifully illuminated by the soft-natural light

Viewing to the city from Mandalay Hill 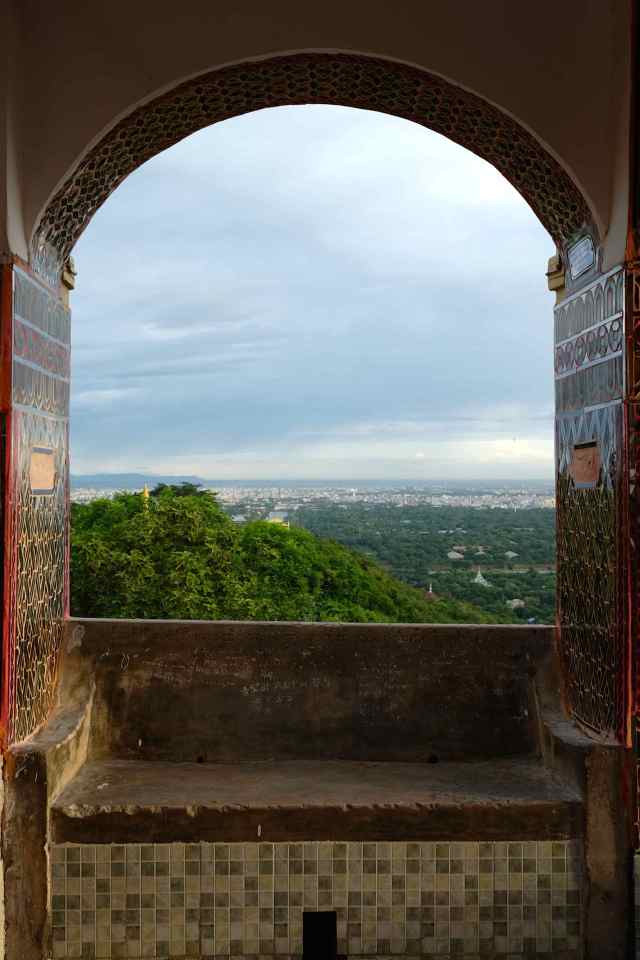 A bench facing the city from Mandalay Hill

Afterward we dined on a street vendors selling Shan noodles, then stopped at a bakery to buy some chocolate cakes for dessert. It was around 8.30 when we fot back to our hotel and rest. Tomorrow, we are leaving Mandalay and headed to Inle by flight.

Kevin is a research analyst at a macro research firm and a private fund manager since 2012. He holds a Master of Management in Finance degree from McGill University and has passed all levels of CFA and FRM exam. Kevin is an avid traveler and photographer, with a record of 33 countries visited in 2019. He is a freelance contributor at Getty Image and is running two website in his spare time, journeyman.live and putamencapital.com
View all posts by Kevin →
This entry was posted in Myanmar, Travel and tagged bell, cityscape, hill, hsinbyume, kuthodaw, maha myat muni, mandalay, mingun, Myanmar, old palace, pagoda, Travel. Bookmark the permalink.