Today is the second day I’m in Jogja, after exhausting activities yesterday and sleeping for only four hours, today I woke up at 3.30 a.m. to catch the sunrise in Borobudur temple. The ticket for seeing sunrise at Borobudur is different than the regular ticket! Ticket for seeing Borobudur sunrise and sunset are sold only by Manohara Hotel. We walked for 10 minutes from our hotel Saraswati, in front of Borobudur complex to Manohara hotel located inside the complex. It was still dark at 4 a.m and when we arrived we bought the ticket for sunrise, local people are charged Rp 270.000 ($24) while tourist are charged Rp 450.000 ($38). Although the ticket is pricey, I would still recommend visiting Borobudur at sunrise.

After buying the ticket we were briefed to take a flashlight and told there would be coffee and snacks when we come down, back to the hotel to return the flashlight for souvenir. At 4.30 we were allowed to walk into the Borobudur, it is only five minutes from the ticket counter to the gate of Borobudur, where our ticket is checked. I set my tripod and took a spooky picture below of people going up the temple. 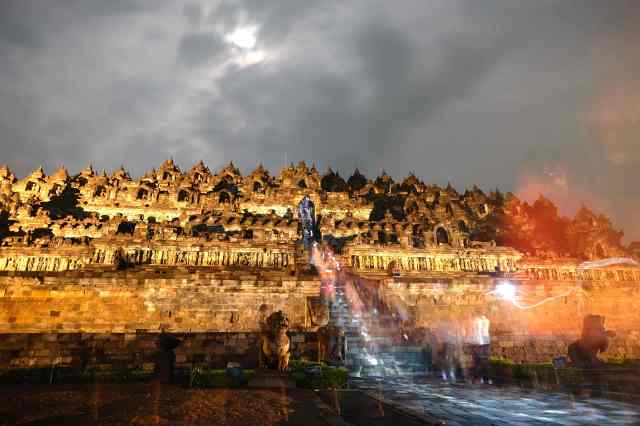 There’s plenty of time for us to sit back and relax, or for me, taking photos before the sunrise. If you bring a compass, you should know where the sunrise is going to be and you should sit at that side, because people are going to be all over that place once the sun rise. If your are a photographer, like me, it is best to set your tripod in the most suitable site. 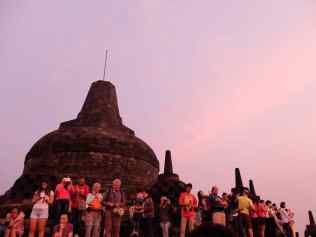 It is rather difficult to photograph the temple without people in the image, but I managed to take few decent shots.

We descent the temple slightly after seven when the sun is pretty high already and the sky turned blue. We enter Manohara Hotel again to return the flashlight and got a sarong in return. We are also entitled to have coffee, tea, and some snacks in the cafe.

We rest for an hour in the cafe while checking emails and other stuff, then we walked back to our hotel, Saraswati for bath and late breakfast. Saraswati is a decent hotel at a reasonable price, but at slightly more, Manohara is a better choice. Manohara Hotel (the one inside Borobudur complex) cost $100 per night while Saraswati cost $90 per night. However, Manohara is simply better in all aspect. At our first night we stayed in Saraswati because Manohara is fully booked, but tonight we are moving to Manohara.

After a long bath and a heavy breakfast at Saraswati, be decided to rent a bicycle for less than $5 per four hours. We cycle to the villages at the back of Borobudur temple, through rice fields, bamboo bridge and local schools. Manohara hotel offers the same service for $40 per person with a guide. 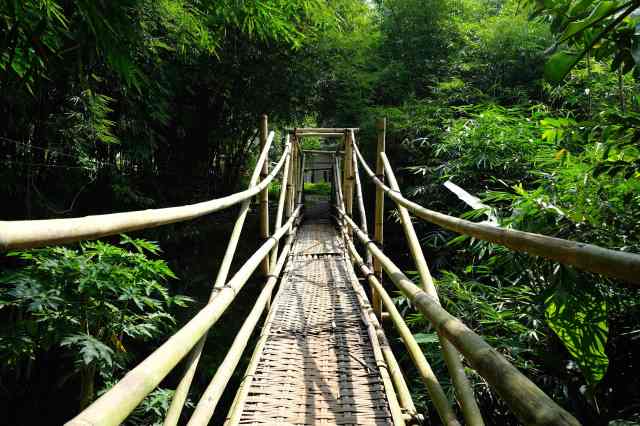 Two hours cycling is tiring but we covered the area surrounding Borobudur complex. We got back to the hotel and check out. We have to walked again to Manohara with our backpack to check in for tonight stay and we bought several bottled water on the way. The room in Manohara Hotel is large and convenient, there’s also a balcony as well for every room. We were lacking of sleep for the last two days, so after checking in we took a shower again (we were sweating after the bicycle trip) and sleep until 3 p.m.

We were hungry, so we eat in the cafe inside Manohara Hotel. I ate seafood fried rice which is delicious and reasonably cheap ($4) for a hotel standard. At four in the evening we walked to Borobudur again to see the sunset. We waited until the sun is going down, little did we know that there’s a sunset ticket being sold as well, and people without the ticket are rushed down the temple. They really monetised Borobudur with different pricing system, which seemed unfair to many visitors. We were rushed to go down at 5.15 p.m. but I managed to get decent shots before the descent. 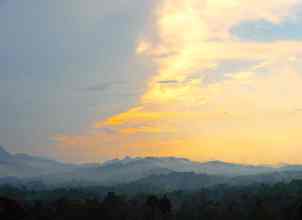 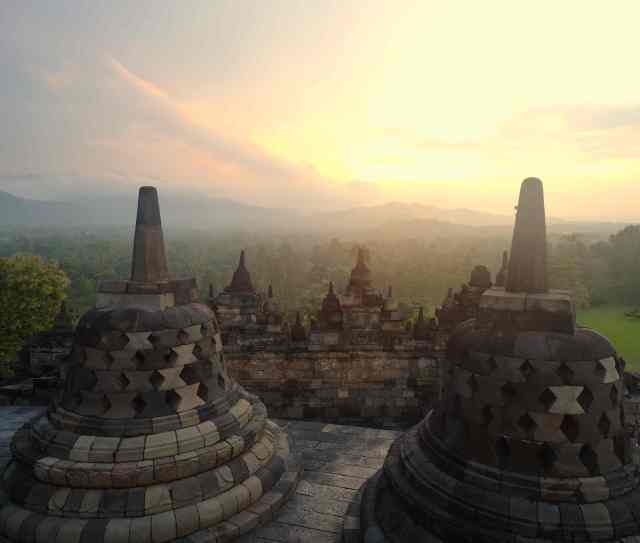 Kevin is a global macro analyst with over four years experience in the financial market. He began his career as an equity analyst before transitioning to macro research focusing on Emerging Markets at a well-known independent research firm. He read voraciously, spending most of his free time following The Economist magazine and reading topics on finance and self-improvement. When off duty, he works part-time for Getty Images, taking pictures from all over the globe. To date, he has over 1200 pictures over 35 countries being sold through the company.
View all posts by Kevin →
This entry was posted in Travel, Yogyakarta, Indonesia and tagged borobudur, indonesia, itinerary, manohara, price, sunrise, Sunset, temple, ticket, Travel, trip, yogyakarta. Bookmark the permalink.