Readjusting Life According to One’s Priority

When we were a child, none of us had a real insight of what we are going to be in  the next twenty years. What we do was observing people around us, starting from the people close to ourselves, our parents. I’m sure we all had different family background, some of us may not have a parents, some of us grow without knowing one of them, and the lucky one have both of them. At family gathering people usually teased us with the question, “What do you want to be when you grow up?”. It is a question asked billion times when I was growing up and as a kid I was enthusiast in telling them what I want to be. My sister and I wanted to be an astronaut, as far as I remembered nobody told me that it is nearly impossible for us to be an astronaut. Perhaps that’s because they didn’t want us to be disappointed and they knew that we are not going to be an astronaut anyway. But you could tell from their face expression that it was not the answer they expected to hear.

I can’t remember the details about the progression of my childhood aspiration, but I knew that when I was about to graduate elementary school I changed my answer to a more rational answer. As a kid, of course I choose from the list of “cool job” which then was limited to pilot, doctor, and architect ( I don’t think lawyer get into the list). Fast forward to six years later, I was graduating from high school and enlisting for medical school. I was thinking about the prospect of each job from a teenage point of view (which is very limited and subject to generalisation), taking a business degree doesn’t sound good to me because the amount of people taking it each year will have to compete later on job searching (but now I realise that job vacancy for business graduate is more widely available), and I wasn’t into IT or anything else. I was quite smart (or I tend to think so) and want the best option I had at the time, which lead me into taking medicine.

Six month ago I graduated from medical school with Bachelor of Medicine. Reflecting back to the last four years, I found medicine quite interesting but while studying medicine I found something else more interesting, stock investing and trading. I’ve been trading since  my second year in medschool and it has been going well according to the market benchmark, during my study I found myself studying the market more often than studying medical textbook. I just enjoy it that much and participating in the stock market surrounded by hundreds of mutual funds and market volatility made me feel a part of a bigger group. But I think investing and trading as a side job instead of my career focus, so I enlist on residency to get my “doctor” certification.

I was completely out of touch with stock market during my daily residency in hospital, the daily activities are exhausting and time consuming. Most of the time I am imagining of quitting medical school and day trade for living, trying to figure out the next step. Despite my interest in medicine, I know deep inside I don’t want to work as a doctor. You might think it’s shallow life, but I like to travel the world, drinking pinna colada on a beach rather than routinely get up everyday to do my job. I like the freedom of not having a day job, so I figure that my next step is having a stable income. It doesn’t have to a big one but enough to sustain the lifestyle I want to live, more or less $3000/ month.

I quit my residency two months ago, enlist on MBA program on finance (which is all about stock market and banking), and learning about forex trading (on a losing position currently). It’s not the perfect life, but hey, at least I’m closer to what I want today than I was earlier this year. On the other aspect of life, I have been reducing my possession to 10% (yes, literally 10% although I think it is even less than that) of what I had five years ago to adjust the lifestyle I wanted to have (which is traveling). I threw out 5 big boxes of childhood toys (Lego and Gunpla mostly), give to charity all of my books (now I buy e-books), switch my photography equipment to a simpler one. I scanned my notes and threw the paper, never had I miss or wish I had the hardcopy. One saying I truly applied today is shaping the life I have now to the life I want. Decluttering my possession is so liberating and addicting that once I feel the freedom I have with less stuff, I want to reduce more. Here’s ALL of the stuff I have today: 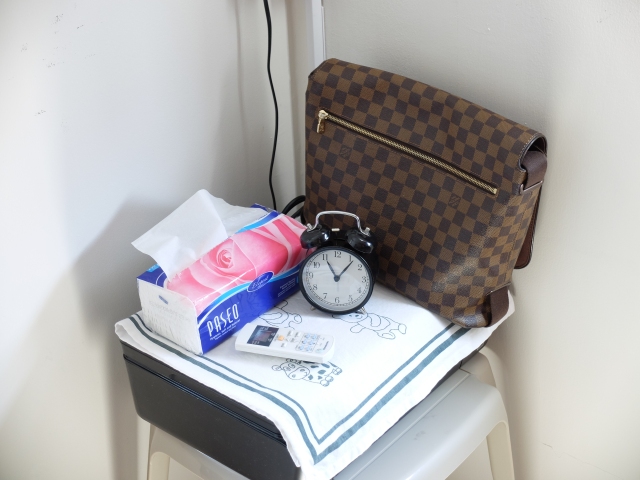 A lot of times we are so exhausted in our daily activities that we forget the big picture of life we are having. The same goes with our possession, we splurge on things we thought will enhance our quality of life, but the reverse effect may be true. Imagine if we could start again from scratch, what would you do? What will you have? What won’t you have? Perhaps it’s time to adjust accordingly.

Kevin is a global macro analyst with over four years experience in the financial market. He began his career as an equity analyst before transitioning to macro research focusing on Emerging Markets at a well-known independent research firm. He read voraciously, spending most of his free time following The Economist magazine and reading topics on finance and self-improvement. When off duty, he works part-time for Getty Images, taking pictures from all over the globe. To date, he has over 1200 pictures over 35 countries being sold through the company.
View all posts by Kevin →
This entry was posted in Review and Ideas and tagged career, change, declutter, finding, getting lost, life, medical school, ourself, plan, possession, quit, readjusting. Bookmark the permalink.