Today itinerary has few sightseeing and a lot of sitting on the bus, because today we went from Krakow, Poland to Budapest, Hungary. On our way to Budapest we cross Slovakia and stopped in Banska Bystrica. We woke up at six and on road at  eight. As usual there was a lot of sightseeing from the bus, the vistas and landscape are beautiful. 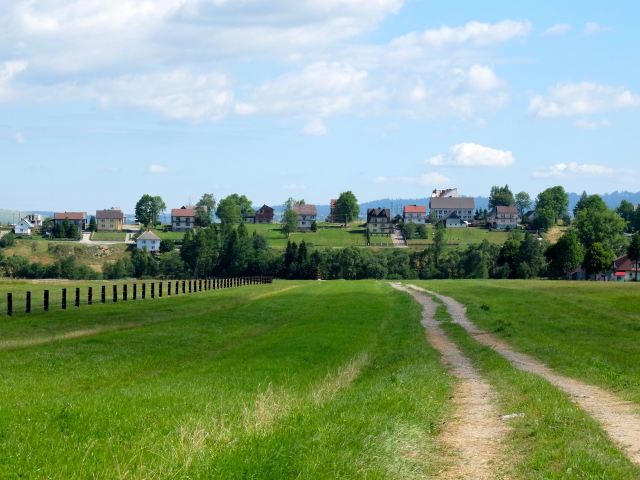 The Landscape at a gas station on the way to Banska Bystrica (Slovakia).

Landscape on the way to Banska Bystrica (Slovakia).

I took three hours for us to get to Banska Bystrica and have our lunch there. We stopped on the lower parking lot near city’s old town and walked to the city hall. The architectures are beautiful, colorful, and it was exciting to walk up the hill. 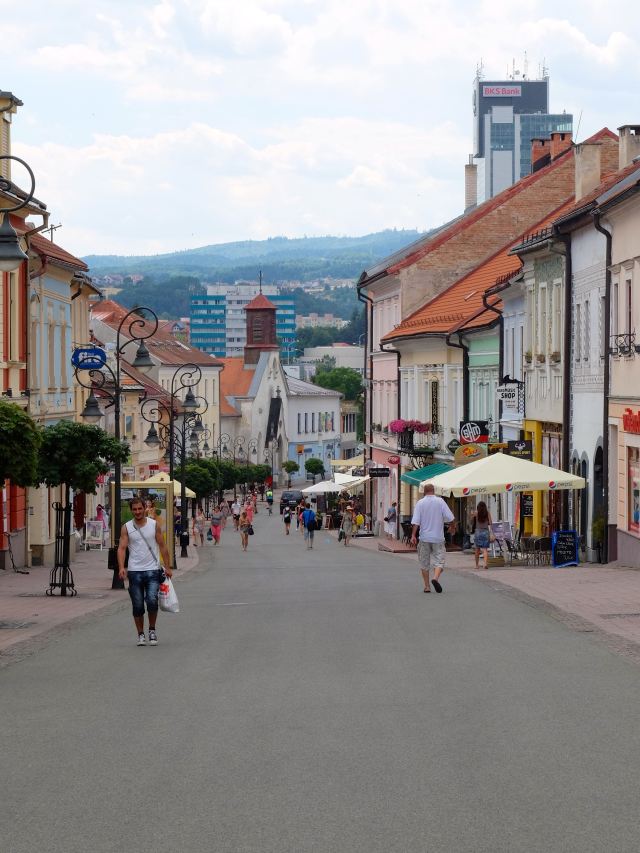 The road uphill to the old town area of Banska Bystrica.

Banská Bystrica is a city in central Slovakia located on the Hron River in a long and wide valley encircled by the mountain chains of the Low Tatras, the Veľká Fatra, and the Kremnica Mountains. With 78 327 inhabitants, Banská Bystrica is the sixth most populous municipality in Slovakia. As a historical city with an easy access to the surrounding mountains, Banská Bystrica is a popular winter and summer tourist destination.

Our lunch located at the city hall, a fancy restaurant with European style architecture. We have mushroom soup, beef stroganoff, and strawberry cake. Then we walked around the hall, bought ice cream and fridge magnet. 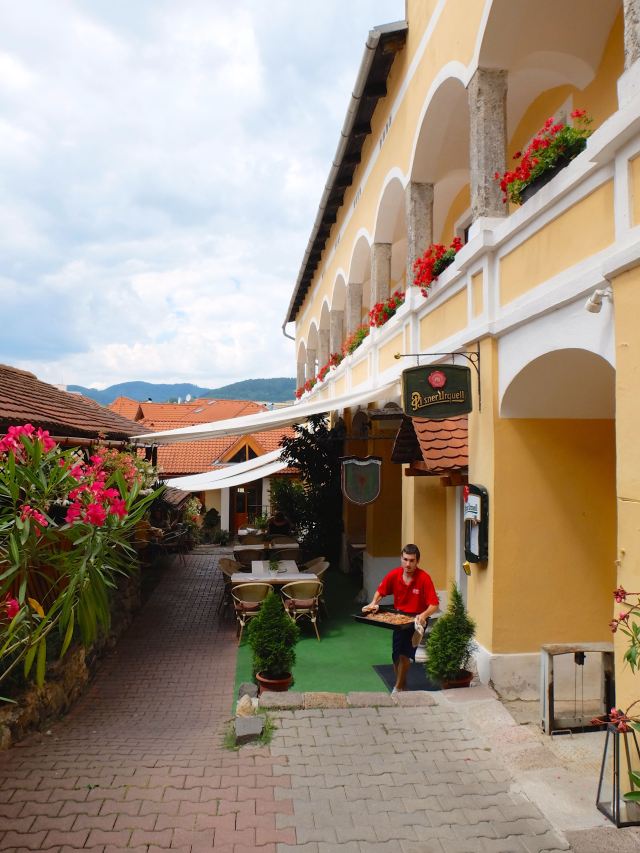 Our restaurant for today lunch.

It took us another four hours to get to Budapest and we stopped only once for toilet. We arrived in Budapest around six and it was still very bright, the sunset comes around eight in here. 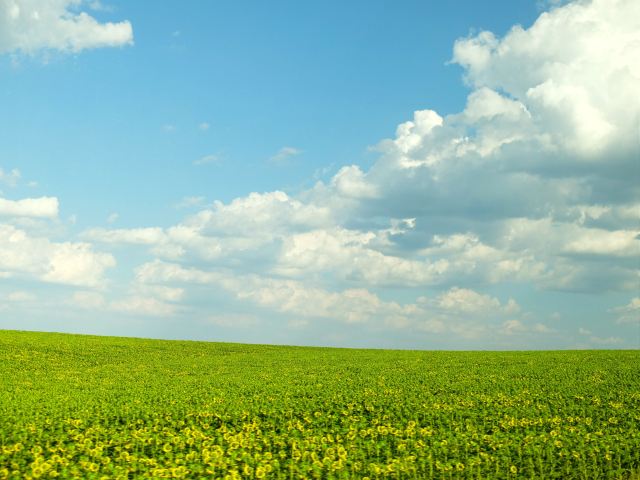 Millions of sunflowers on the road to Budapest (Hungary).

We eat in a very fancy fine dining restaurant with live violin play called Domus Vinorum. We requested several songs and tipped them, the restaurant is underground and the atmosphere was nice and romantic. Definitely a recommended place to have dinner in Budapest.

The atmosphere was great in Domus Vinorum. 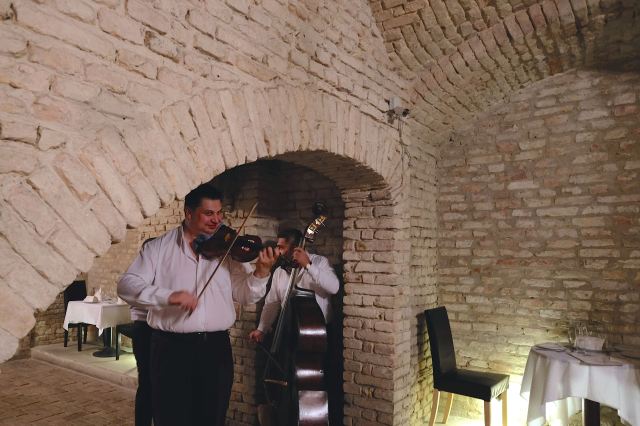 Budapest is the capital and the largest city of Hungary, and one of the largest cities in the European Union. The Budapest Metropolitan Area is home to 3.3 million people. The city covers an area of 525 square kilometres. Budapest became a single city occupying both banks of the river Danube with the unification of Buda and Óbuda on the west bank, with Pest on the east bank on 17 November 1873.

Statue near Vaci Utca, the shopping road in Budapest.

Cited as one of the most beautiful cities in Europe, Budapest’s extensive World Heritage Site includes the banks of the Danube, the Buda Castle Quarter, Andrássy Avenue, Heroes’ Square and the Millennium Underground Railway, the second-oldest metro line in the world.

After finishing our dinner we headed for our hotel in the next two days, Mercure Budapest Buda. At eight o’clock we started our night trip photographing Chain Bridge and Parliament House. We walked from our hotel to the Pest side of Chain bridge as the sun sets. It was beautiful, the vanilla sky at the back of Parliament House.

We walk few kilometres from our hotel to Vaci Utca.

The bridge has the name of István Széchenyi, a major supporter of its construction, attached to it, but is most commonly known as the Chain Bridge. At the time of its construction, it was regarded as one of the modern world’s engineering wonders. It has asserted an enormous significance in the country’s economic, social and cultural life, much as the Brooklyn Bridge has in New York and United States of America. Its decorations made of cast iron, and its construction, radiating calm dignity and balance, have elevated the Chain Bridge to a high stature in Europe. It became a symbol of advancement, national awakening, and the linkage between East and West. 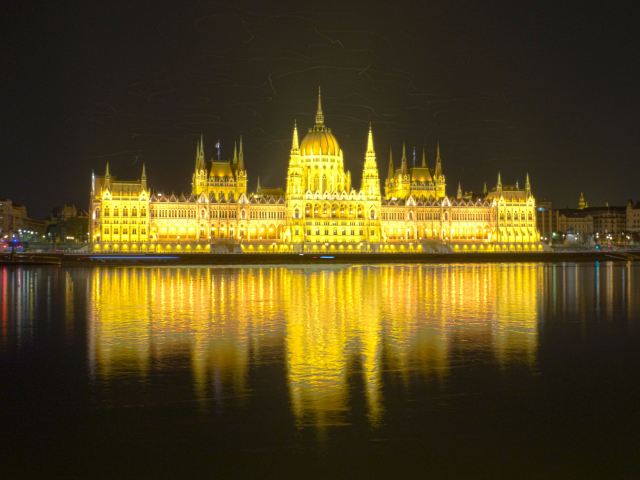 The famous and iconic Parliament House in Budapest. Notice birds hovering the top of the building creating a trail of light.

We walked quite far, about 30 minutes to get to Vaci Utca, the shopping area in Budapest. Afterward I and my father explored Budapest by foot until two o’clock in the morning. We walked from Chain Bridge to across Parliament House, then continue to Fisherman Bastion. We got lost in dark alleys, but eventually find our way back with our sore feet and feeling exhausted. 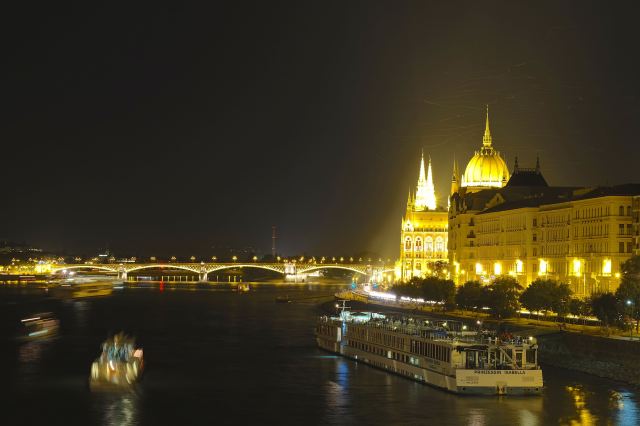 Cityscape of Budapest taken at midnight.

A global macro analyst with over four years experience in the financial market, the author began his career as an equity analyst before transitioning to macro research focusing on Emerging Markets at a well-known independent research firm. He read voraciously, spending most of his free time following The Economist magazine and reading topics on finance and self-improvement. When off duty, he works part-time for Getty Images, taking pictures from all over the globe. To date, he has over 1200 pictures over 35 countries being sold through the company.
View all posts by Journeyman →
This entry was posted in Eastern Europe, Travel and tagged banska bystrica, budapest, chain bridge, domus vinorum, landscape, night, old town, parliament house, Sunset, Travel. Bookmark the permalink.