Today is the day I’m going to one from seven wonders of the world, after looking for information about the best way to watch sunrise at Taj Mahal we prepare ourselves for an early tour. We woke up at 4.20 am, took shower because we thought we couldn’t go back to our hotel in Clark Shiraz after the visit. The day before we have told Ram, our driver in India that we are going to see Taj Mahal at sunrise so he can come earlier and prepare the car. On visit to Taj Mahal you’ll want to go as light as possible, as there are lots of restricted goods prohibited such as lighter, tripod, food, candy, flashlight, etc. At first I was thinking about bringing my tripod, but now I can’t. Being a smart-ass guy I tried to cheat them by bringing the ballhead only instead (which later has to be left to an ice cream vendor, a friend of my tour guide at the price of 20 rupee).

The waiting line in front of West Gate of Taj Mahal

Sunrise in Taj Mahal is about 5.55 according to google, 6 am according to local guide. We depart from the hotel at 5.15, although the drive from Clark Shiraz to Taj Mahal is only 5 minutes away to the West Gate. Tourist usually flock up in the East Gate, said my tour leader so he take me to the West gate. I’ll cover this later. Keep in mind that what people mean by West, South or East Gate is not the gate where you directly visit Taj Mahal, but the gate that leads to a big space where you’ll enter Taj Mahal. So there is only one gate to enter Taj Mahal, but many gates to go to the gate that enter to Taj Mahal (look at the map online to understand better).

Taj Mahal near the bench where Lady Diana sat.

Ram dropped us at an entry of the West gate where we have to proceed by foot, usually there are golf car or camel to take us to the gate but since it was early in the morning and the sky was pitch black there were none. Not to worry, the walk is only about 10 minutes but we were little bit rushed so you may want to spare another 5 minutes. This is the reason some people prefer the East Gate where you could directly enter the line of East Gate, but should you choose the West Gate like me, you’ll have to walk 10-15 minutes to get into the line. Shortly speaking, if you are a tourist without tour leader you should go to the East Gate where the taxi will drop you in front of the gate.

We walked to the West Gate and got into the first line, do collect a bottle of mineral water and shoe cover at a locket nearby. The waiting line is divided into women and men, with two armed police guarding the gate. We waited for 30 minutes in front of the huge gate, trying to get flies and mosquitos out of our skin. After 10 minutes waiting, an American came, then a group of western tourist swarming the waiting line. The sky already turned blue from black when the gate was opened, but they insist that the sun hasn’t rise yet. 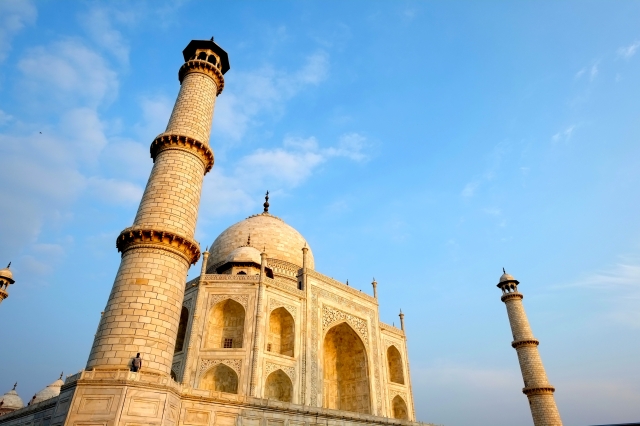 At 6 they opened the gate and arranged steel handrail that leads to X-ray machine. I am the first in line but due to my ballhead I brought, I got stuck for 30 seconds until my tour guide took the ballhead and leave it outside to his friend. First I walk with my mom, then I see people start running so we did too. At the entry gate to Taj Mahal few people are already there, taking the center fields so they can photograph the Taj symmetrically without any people on the picture. I did the same as planned, then focus on the water reflection. You have to be fast taking picture in the “hot spot” because other tourist and local are going to rush you, so it’s better to preset your camera before entering, I found 1/60 f/5.6 ISO 400 to be a good combination.

Silhouette of a guest building in Taj Mahal complex.

After the first “hot spot” zone, we rush to the bench closer to Taj Mahal but still on the center of it. Lady Diana had once photograph there, that’s why it became a “hot spot”. That’s two “hot spot” I found worth fighting for, the other angle could be covered later decently. So my tour leader brought us to another bench facing Taj Mahal at the lower ground, where there were very few people passing by and start telling the history and beautiful detail of Taj Mahal. It took 20.000 men, the best in their fields (stone cutting, marble carving, etc.) for 22 years to finish the mega structure. The design was taken from Moslem architecture while  the precious stone and marble were taken from many parts of India and the world. 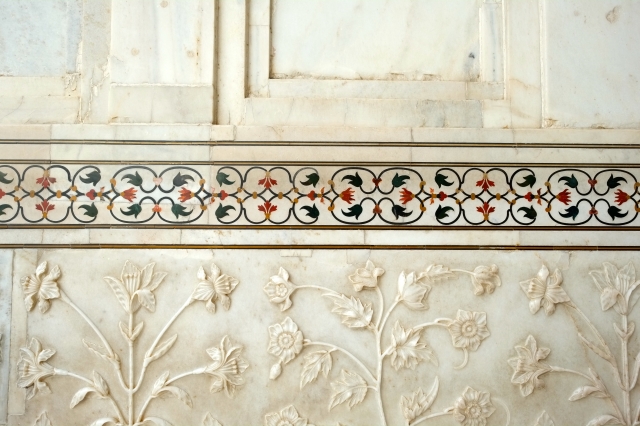 Then I requested to continue to the right side of Taj Mahal, where I could photograph Taj mahal shined by the morning sun, a warm sun ray reflected on the marble and stones. We also went inside the tomb and other rooms, exiting at the back of Taj, facing Yamuna River and ornamental garden. We went outside the Taj and…

“There she was with her gold-colored hair flowing in front of Taj Mahal white marble, glittering beautifully, even more than any gemstones on the Taj Mahal under the morning sun. Her wide eyes catch mine for half second then she looked down, checking her black long dress. A big, bald men in his fifty said something to her and someone who looks like his brother and mother in a languange I rarely heard, a Russian accent I’m guessing. Then our path divides, a glimpse of love that just vanished forever”

After trying to get her out of my mind, which hasn’t until now I go back into reality. Our next visit is Agra Fort, a fort and palace where the Indian army still lives and the place where Akbar used to live. The fortress is unpenetrable even by the British army, when you see the way they design the wall and floor, you’ll understand why. Although Agra Fort is larger than Amber Fort in Jaipur, we couldn’t go to every area of the fort due to the army living there. Agra Fort’s architectural looks very alike with Fatehpur Sikri, but the view is outstanding toward the Yamuna river and Taj mahal itself.

Agra fort from the street. 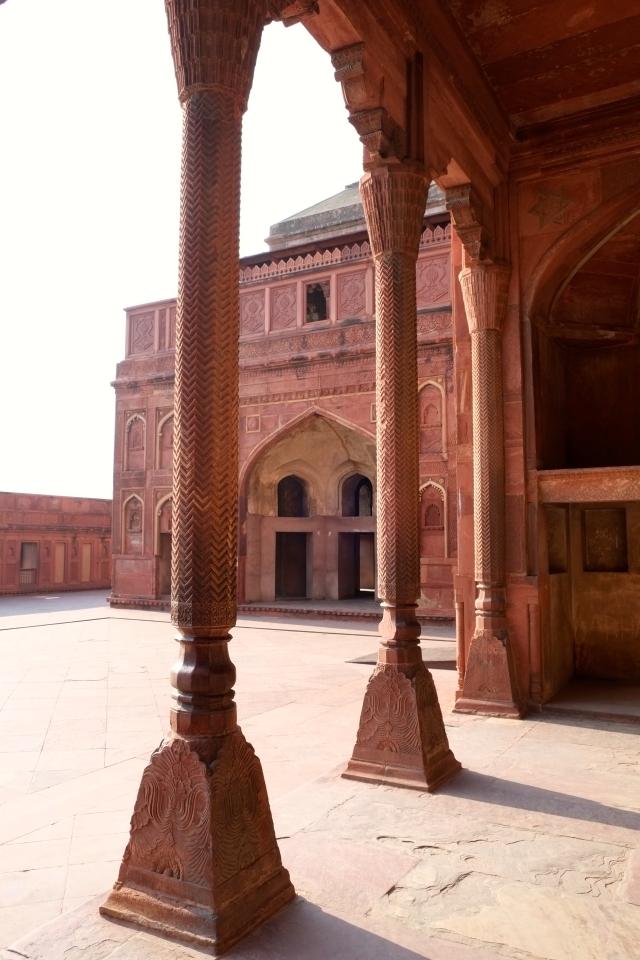 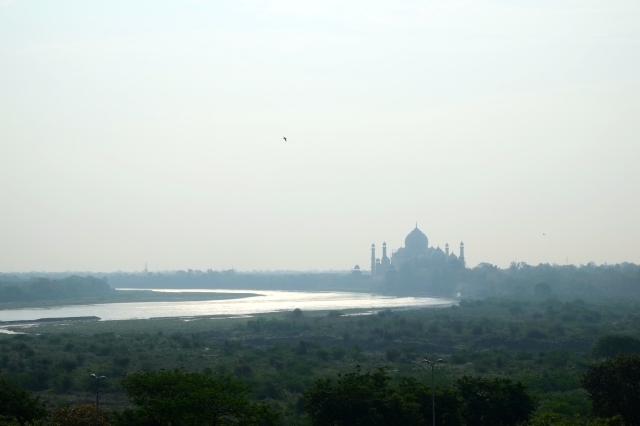 We checked out at the hotel afterward, rest for one hour then went to Jewel workshop. You know the details of Taj Mahal marble which are encrusted by precious stones that resembles a painting and still do after 500 years, here they show us how it is made and sell some souvenirs and tables. Next we went to back hotel while waiting for lunch, we drink tea and eat french fries. At 11.15 we go to lunch at Taj Mahal restaurant and served chicken curry, rice, potatoes, prata, and foods I don’t know the name. It was good actually and the taste is acceptable to our tounge. Today we also drive to Delhi, the capital city of India. It felt faster than it really was, taking 4 hours from 12.30 to 16.30. We went to Oberoi Hotel because my sister want to buy a Hermes birkin bag, they have an expanded collection there, 3 lindy bag with different color and various accessories. To buy a birkin you have to spend $5000-6000 first, then the store sales will pre-order the birkin you want, he even give me his contact number in case I want to buy from Indonesia.

The next thing we want to go in Delhi is The Hard Rock Cafe in DLF place in Saket, but Ram mistaken DLF mall and DLF place which is two different mall. So we had to drive for another 30 minutes to Hard Rock cafe in Saket. We eat in HRC, bought some shirts then headed to the hotel. We also tipped our driver for 5 days, Ram could eat for half month with our tip, we like him because he is really concerned about our safety. Our hotel in Africa Avenue is a boutique hotel with standard but clean room, a good and affordable way to stay in Delhi.

A global macro analyst with over four years experience in the financial market, the author began his career as an equity analyst before transitioning to macro research focusing on Emerging Markets at a well-known independent research firm. He read voraciously, spending most of his free time following The Economist magazine and reading topics on finance and self-improvement. When off duty, he works part-time for Getty Images, taking pictures from all over the globe. To date, he has over 1200 pictures over 35 countries being sold through the company.
View all posts by Journeyman →
This entry was posted in India, Travel and tagged agra, Delhi, fort, hard rock cafe, India, photography, sunrise, taj mahal, Travel, trip, west gate. Bookmark the permalink.