South Africa: Day 10-11 -Going Back to Singapore, Garden by the Bay, Marina, Orchard

Today I took a flight to Singapore via Johannesburg, from Cape Town at ten o’clock. That means waking up at five, having a quick breakfast at 6.45-7.00 and going to airport at seven. While waiting for departure we went to shop inside Cape Town Airport titled “Out of Africa”, a souvenir shop carrying clothes, keychain, doll, and others African themed goods. After two hours flight we arrived at O. R. Tambo Airport at Johannesburg to pick up passengers and foods, also changing the airplane crew. We can’t get out of the plan while on the ground for more than one hour and got pretty bored inside, but I decided to finished the movie I watched earlier. I didn’t sleep on the way from Cape Town because I knew I needed to sleep on the next flight to avoid jet lag when arriving in Singapore later, so I watched “300” and “The Other Woman” on the flight. When I knew I had seven hours left on flight, I decided to sleep for the rest of flight while listening to music with my Bose QC15 that blocks most of the engines noise.

Four sleeping position and one bathroom visit later, I woke up refreshed and ready for today’s activity. The flight arrived in Singapore at six in the morning local time, or midnight in South Africa. My sleeping schedule is ruined for today, I had jet lag and couple times sleeping when I shouldn’t have, so does my mother and sister. Today we visited Garden by the Bay, a plants and flower conservatorium from all over the world. It cost $28 for each person to go to both dome, one for flower and one for plants. Inside the dome are cold, the temperature is preserved for the plants growth and the waterfall inside doesn’t make it any better. 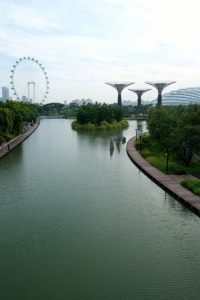 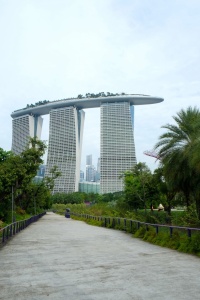 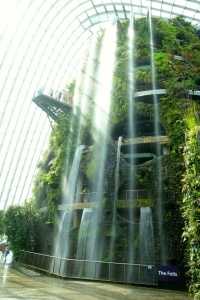 We left our baggage earlier in Supreme Hotel, the cheapest hotel near orchard road with not-so-friendly receptionist. Then we arranged a meeting with our cousin to go to his office in the east side of Singapore, thirty minutes taxi ride from Marina Bay. We met and eat together in Din Tai Fung Marina Bay. We also talked and surveyed his office for making wristwatches and chatted about our other cousins after eating. His office is located in an industrial area, about 10X10 meter in size. 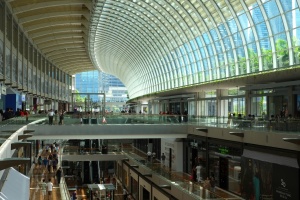 We were tired, need to sleep, and starved after leaving cousin’s office so we want to go back to Orchard Road for dinner and buying supplies. And we did, in an uncommon way. First we took a bus number 520 which goes to Orchard for one hour ride, but in the middle of the ride we think it’s better to ride a taxi for more convenient and shorter time span, so we got off the bus and look for a taxi. It turned out that we are looking taxi in the wrong time, most taxi driver have to switch with their friends for another shift at five until six o’clock, but finally we manage to have a ride to downtown.

We went straight to Takashimaya, one of the biggest and most complete mall in Singapore for dinner, we ate in the food court for about $10 each person and bought water supplies for the following days. Tired and in a bad mood, we took another ride to hotel and sleep for the day. Finally I could sleep and lay my body on a bed. 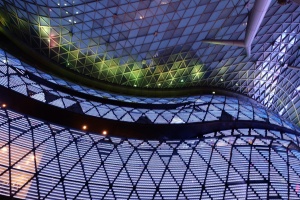 A global macro analyst with over four years experience in the financial market, the author began his career as an equity analyst before transitioning to macro research focusing on Emerging Markets at a well-known independent research firm. He read voraciously, spending most of his free time following The Economist magazine and reading topics on finance and self-improvement. When off duty, he works part-time for Getty Images, taking pictures from all over the globe. To date, he has over 1200 pictures over 35 countries being sold through the company.
View all posts by Journeyman →
This entry was posted in South Africa, Travel and tagged Adventure, airplane, deprivation, Garden by the Bay, orchard, singapore, sleep, South Africa, Travel, trip, waterfall. Bookmark the permalink.