Today I went to Soekarno Hatta Airport to go to Johannesburg, South Africa. This is the trip I’ve dream for more than 5 years, and the last continent I haven’t visited in the world. This is it. I lock my apartment at nine in the morning, took a taxi to the airport and took off. I have a transit for nine hours in Singapore Changi airport and to fill the time I went for a short city tour around the town. The first stop is Merlion statue in front of Marina Bay Sands Hotel, a very common tourist attraction. There are many street food and five star restaurant nearby, but I didn’t buy any snacks because I had just eat inside the airplane. 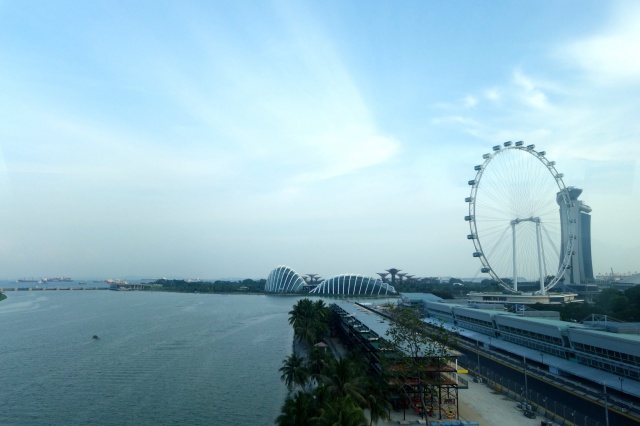 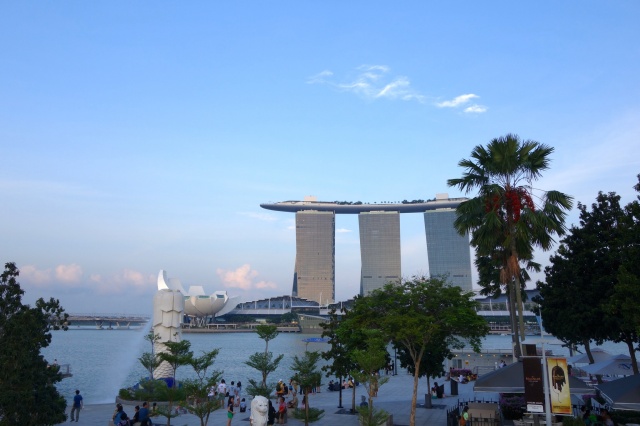 The second stop is a restaurant near Singapore Flyer, a giant wheel with over 150 m heights above the ground. It is a thirty minutes ride, when you get above the ground you could see the whole city from the cylindrical-glass. I had a buffett afterward at a restaurant in the same complex with the flyer, along with the other group members.

Next we go to Marina Bay Shopping Mall, one of the most luxurious mall in Singapore. It carries branded names like LV, Gucci, Prada, you name it. And for a watch lover like me, window shopping at Patek Philippe, Jaeger Le-Coultre, Rolex, AP, Lange was a wonderful time despite I didn’t have a budget for buying another watch. From Marina Bay, I split with my group and decide to go back to airport to take a shower, while they are going to Orchard Road for the next stop. I took MRT to Changi Airport which took about 40 minutes and change train two times, the interchange in Paya Lebar and two station before the airport.

Soon as we arrive in the airport we (I and my family) took an elevator from the basement and pass the immigration process. We forget the name of the lounge where we could take a shower and ask the information, which were very helpful. Rainforest lounge is the name, in Terminal 1. The lift to rainforest lounge was horrifying, it took about a minute to bring us from level two to level three, which is unusual under any circumstances. Each person cost S$10.30, so we paid S$41.20 and the receptionist gave us four towel. The bathrooms are pretty decent actually, but you’ll have a little problem by bringing your luggage in to the 1X2 m cubicle. There were cold shower only and the one with hot water bathroom, so be careful in entering any of the cubicle.

After taking the shower, we could grab a drink and allowed to sit for fifteen minutes only in the lounge so I got hurried in taking advantage of the wi-fi and download all e-mails, facebook, etc. It was worthed for me to paid only $10 to have a shower, because I can’t a shower for the next 30 hours. Soon as I landed in Johannesburg we would take a tour around the city and get to hotel at night. With 11 hours flight and activities until 7 pm the next day I would feel tired without a shower.

The problem now for me as I’m writing this post is how to sleep well inside the “luxurious” economy seat for the next 11 hours. So I wake up with my left ass tingling and slight back pain, but nothing serious though. Believe me, I’ve tried all position sleeping this time, from the neonatus position to all body parts straight. In the neonatus or baby position, my back hurts against the chair hand which separates me and my mother. While in all straight position my ass got slipped many times and I have to adjust my position everytime I woke due to uncomfortable position it resulted. I think it is worthed to buy a business ticket for long haul flight if you have the budget.

Now I’m one hour and thirty minutes from landing in Johannesburg, I think I’ll listen to Opera with my trusty Bose QC15. It is the best noise cancelling headphone ever (until I write this post), and frequent traveller are familiar with this headset. Once you turn it on, it block the noise from you environment due to the noise isolating, plus the “low frequency” noise like the engine. It gives me a very good sound, way better than Beats monster which my sister had.

I just come back from the plane’s bathroom now, taking a morning dump. Ha! I’m ready for the world!

A global macro analyst with over four years experience in the financial market, the author began his career as an equity analyst before transitioning to macro research focusing on Emerging Markets at a well-known independent research firm. He read voraciously, spending most of his free time following The Economist magazine and reading topics on finance and self-improvement. When off duty, he works part-time for Getty Images, taking pictures from all over the globe. To date, he has over 1200 pictures over 35 countries being sold through the company.
View all posts by Journeyman →
This entry was posted in South Africa, Travel and tagged Adventure, airplane, airport, journey, lounge, marina bay, shower, singapore, South Africa, transit, trip. Bookmark the permalink.