Today I’m going to try wearing Hanbok, Korean traditional clothes. The robe have a bright color, signaling a higher position in society. I wear the red one, on ancient times it is used by the king. Then we made a kimchi, consisting a lettuce, and a lot of spices. Kimchi could be stored for 2-3 years and be eaten, the longer it is stored, it will taste more sour which Korean people like. From my Hotel in Oak Valley (near the Ski Resort I went yesterday) it took about 2 hours, the view was mediocre, mostly mountain covered with snow. I also eat in Korean BBQ restaurant, I eat a lot of pork and rice called dae ji galbi and bab (rice). It cost $15 for all you can eat, and it is located near my next destination, Everland.

Everland is a theme park, recreational place for family. Basically it is a Korean Disneyland, I went to the safari park, took a 15 minutes bus ride seeing lion, tiger, goat, bear, giraffe, elephant, and flamingo. There’s a lot of small animals too, there’s also an amphibi ride for the safari, I took it too and although it was cold I’m enjoying the beautiful view. 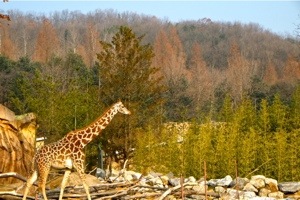 While I’m exiting the mini-zoo, there’s a penguin parade! About ten penguins with christmas themed clothes are walking in the road.

Seoul is another 1 hour ride from Everland, I went to Seoul, the capital of South Korea around 16.00. Entering the capital, I stopped to eat Samgetang (a boiled chicken with ginseng), which is very popular in Korea. It is a half chicken boiled with ginseng and rice inside a soup bowl. The chocolate milk here is great, since I arrived yesterday, I had drank at least 4 cup of it ($2.5 each).

I also went to Trick Eye Museum, it is rooms filled with painting and photograph where you can pose and look like you are in that place. The ice museum is great too, filled with carved ice which look like utensils, furniture, or even a car.

Around 20.00 I arrived in Dong Dae Mun Market, which mean the east gate of the palace. Now it is a 7 floor mall, in the inside you can buy a lot of clothes, coat, bag, an Korean accessories. Mostly they sell Korean designer clothes, exclusively made perhaps only 2 pieces. My tour guide (a quite fashionable 30 year old women) said that if a Korean women see another women wearing the same clothes, they would toss the clothes away. Now I stayed in Golden Hotel in the city, which is quite nice!

Kevin is a global macro analyst with over four years experience in the financial market. He began his career as an equity analyst before transitioning to macro research focusing on Emerging Markets at a well-known independent research firm. He read voraciously, spending most of his free time following The Economist magazine and reading topics on finance and self-improvement. When off duty, he works part-time for Getty Images, taking pictures from all over the globe. To date, he has over 1200 pictures over 35 countries being sold through the company.
View all posts by Kevin →
This entry was posted in Korea-Japan, Travel and tagged animals, dong dae mun, everland, korea, penguin, zoo. Bookmark the permalink.